KUALA LUMPUR: A government official's comment telling people to eat fewer eggs if they cannot afford it due to recent price hikes has drawn a significant amount of flak on social media.

Norena Jaafar, the Melaka Domestic Trade And Consumer Affairs Ministry director, who was seen in a video interview telling the people to eat fewer eggs, enraged many on social media with some saying she did not understand the hardship faced by those in the lower-income group.

On Twitter, Wani said: "I think for many who cannot afford (other food like fish)... eggs are their staple source of protein. But now, it is also expensive. How are they going to cope? By eating less or starving?

"Malnourishment is already a big problem ... but with current price hikes, I cannot imagine how much worse it will become."

Facebook user Nurul Safidah said there are families who live on eggs as their main meal as that is all they can afford.

"If eggs go up in price (further), what will be their fate?" she asked, adding that people in high positions should not make such statements.

Zidan Ananda said Norena's statement showed that she was unaware that eggs constitute the main dish for those who are struggling.

Another Internet user by the name Pavithra Raja said not all could afford the hike in prices and urged ministry officials to think before making such statements.

In the video, which went viral on Friday (July 2), Norena is heard saying that if consumers know the price of eggs are rising, they should then consume fewer.

"There is no problem, it is our way of life," she said to the media after visiting a local market in Melaka.

The ministry's secretary-general Datuk Azman Mohd Yusof later said that Norena "may have her own way that is not very acceptable by the public". 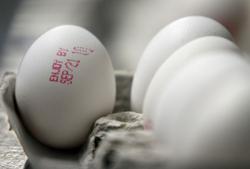