Demand for kapcai revving up Soaring business: Ooi said he sold about 100 low-powered motorcycles a month with demand increasing for it of late. — KT GOH/The Star

GEORGE TOWN: With the emergence of many new food delivery companies, the demand for kapcai (low-powered motorcycles) is going through the roof.

Motorcycle shop owner Ooi Chin Keat said the demand for these types of motorcycles increased by about 30% since the movement control orders were implemented.

“Among the most sought-after are those with engines below 150cc.

“Most of my customers look for these types of motorcycles, with many wanting to use them for food delivery work.

“Since the various MCOs, I have been selling about 100 low-powered motorcycles monthly and orders have increased of late,” he said when met at his shop here.

Ooi said the high demand for brands such as Honda, Yamaha and Modenas had led to a waiting time of at least three months.

“Buying a motorcycle is more of a need than a hobby,” he said. Highly competitive: Mohd Fhamie says his weekly income has dropped from RM600 to RM300 for the past few months while Faroz (below) says there are at least six companies in the food delivery service.

He said kapcai sales during the pandemic was better.

“During the MCOs, people received cash aid from the government and it possibly contributed to the positive sales of kapcai.

“The sales now are not bad; just like before the pandemic.

“Buyers at my shop, who want the popular brands, need to wait at least three to four months before they can get their hands on their orders due to the high demand,” he said.

“With the uncertain economic situation, people are trying to do more than one job to make ends meet and one job that comes to mind is food delivery.

“So I believe this group of people want to have their own kapcai to make some extra income,” he said.

On the low supply of motorcycles of popular brands, Ng said the problem resulted from factories that part-assembled the motorcycles in the country.

“This is probably due to the lack of imported parts and workers at the factories,” he said.

While it has been positive for motorcycle shops, the emergence of new players in the sector has affected the income of food delivery riders.

“My weekly income has dropped from RM600 to RM300 over the past few months.

“This is probably because of new food delivery companies on the scene, as compared to just a handful in the past three years,” he said.

Mohd Fhamie, who has been in this line of work for three years, said he could hit as many as 20 orders per day on a good day.

“But with less opportunity to get as many orders like before, you have to be extra hardworking to meet the target of 20 orders, and that means being on the road from 7am until midnight daily,” he said.

Another rider, Faroz Asraf, 38, said he expected the income of food delivery riders to decline in the next few months in view of the increasingly competitive field.

“But now, there are at least six companies doing the same thing.

“There are more opportunities for those who want an extra job, but this means fewer orders for us,” he said. 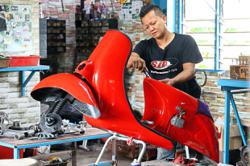