PETALING JAYA: Even before the Covid-19 pandemic struck, Catherine Leyow was picking up litter from the park where she used to walk her rescue dogs and the rubbish easily filled up two carrier bags.

“It used to dismay me, how people didn’t care about the environment, how our animals were being endangered, how the next rainstorm would wash all the plastic bags and bottles into the stream where they would journey onwards to pollute the sea and kill wildlife there,” the co-founder of the Independent Pet Adoption Network recounted.

And then came Covid-19. She said during the first movement control order imposed in March 2020, no one was using the park.

“It was wonderful – there was no litter at all, and the animals could roam freely without the danger of ingesting rubbish or being harmed by plastic refuse.

“I had great hopes that, after the pandemic, people would be much more aware of the dangers to our well-being and to the planet of discarding their litter everywhere, would be more conscious of being responsible as a community to protect our health. I was sadly very wrong,” she added.

However, Leyow said with the pandemic also came a new set of problems – in the form of irresponsible disposal of used face masks which are now part of the litter in public spaces.

“I was aghast. I couldn’t believe that these masks, worn to block the virus and save us from contracting the virus, were carelessly thrown in public to spread the germs further and pollute the park and stream,” she said.

Leyow said advertisements on TV and radio on littering and making this a part of the school syllabus will help in creating awareness.

Animal rights activists and rescuers said the public should be mindful when disposing their face masks as animals could get entrapped and entangled by the strings.Furry Friends Farm president Myza Nordin said garbage goes to the landfill and sea which can lead to strays, birds and marine animals getting entangled.

She said while it was “common sense” to not litter the streets, such deeds were quite common.

“I personally cut the strings (of the face masks) into two or three parts before disposing it. And of course, the best is to use reusable masks,” she said.

“Personally, I would detach the strings. Sanitise the used face masks and wrap them in a paper before throwing them away.

“It is a lot of work but it is better to ensure that it’s safe for animals,” said Lina who has rescued some 60 animals. 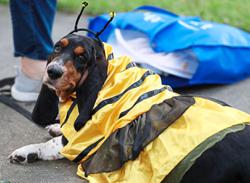