KUALA NERUS: Two sisters and their cousin who drowned during a picnic at Sungai Lata Changkah, Ulu Seladang in Setiu on Friday (June 10) were buried in a common grave.

Syariatul Nurfatihah Mohd Dera, 28, her sister Syariatul Noor Syafiqa, 26, and their cousin Siti Aisyah Mazlan, 19, were laid to rest at the Kampung Hilir Maras Muslim cemetery near Bukit Rakit here at 4am on Saturday (June 11).

The mother of the two sisters, Sarimah Awang, 62, said despite feeling shocked for losing her fourth and youngest child, she accepted it as fated.

"I am at a loss for words. But I take it as a test from Allah,” she said when met at the Setiu Hospital forensic unit.

Sarimah said she and several other family members were also at the picnic but decided to return earlier to their home in Kampung Hilir Maras.

"As soon as I reached home, I got a call from an individual asking me to contact the Fire and Rescue Department. I thought a fire had broken out but it turned out that my children and niece drowned.

"I do not know who fell into the water first. But I was made to understand that my eldest daughter (Syariatul Syafira) wanted to help them but she almost drowned too.

"Thank God, she was saved and is now receiving treatment in a hospital,” said Sarimah.

She said the three victims had been close since childhood and often spent time together.

Sarimah added that her family often visited Sungai Lata Changkah but Friday was the first time they had a picnic at the site of the tragedy, which was quite deep inside and did not have many visitors.

In a statement, Setiu district police chief Deputy Supt Affandi Hussin said it was learnt that tragedy struck when the trio fell into the river at about 2.30pm. - Bernama 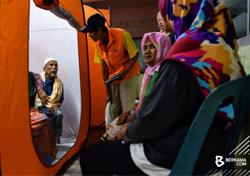