This was the second report lodged by the Kadazan Dusun Cultural Association (KDCA) after insulting comments by another Facebook user against the native community’s customs and culture.

"The person degraded the dignity and customs of the KDMR community," she said on Thursday (June 2).

"I lodged this report as the Unduk Ngadau Kaamatan (UNK) pageant organising chairman so that the police and the Malaysian Communications and Multimedia Commission (MCMC) can take further action."

She added that the report was made in order to preserve the harmony between the communities of various ethnicities and religions in Sabah.

Joanna was accompanied by newly crowned Unduk Ngadau beauty queen Frenerietta Sobitun and other UNK organising committee members when she lodged the report at the Tanjung Aru police station here on Thursday (June 2).

On May 4, she lodged a report after coming across remarks by a Facebook user that insulted Sabah’s native community as well as being offensive towards the KDMR women folk. 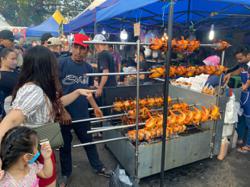