IPOH: Stern action will be taken against those who rent premises under the local council but fail to use it to run their businesses, says Datuk Nolee Ashilin Mohammed Radzi.

The state housing, local government and tourism committee chairman said warnings would be issued first before drastic action is taken.

She said if they failed to adhere to the warnings given, penalties or even terminating their contracts would be an option considered.

However, Nolee said the complaints probably involved several areas only, and was not an overall issue faced in the state.

“If we find that those who rent the premises are not abiding by the rules, then we will not hesitate to take further action,” said Nolee.

She added that the rules were relaxed during the pandemic and movement control order.

“So there is a possibility that some have turned the place into a store or some have had no chance to resume their businesses,” she told reporters at a Hari Raya gathering organised by tourism players at a hotel here Sunday (May 29).

Nolee was asked to comment on a statement by state exco member Datuk Zainol Fadzi Paharuddin, urging the local council to take action against tenants who failed to utilise such premises but continued to pay the rentals.

He said if action was taken, this would allow other entrepreneurs to rent the place to run their businesses.

“There are many other entrepreneurs who need these premises to carry out their businesses, but are unable to secure a place despite some of the places being empty,” he said. 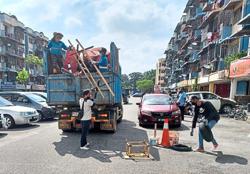