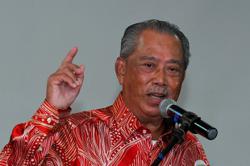 KOTA KINABALU: Political coalitions in Malaysia are not working for the country as they end up squabbling, says Datuk Seri Mohd Shafie Apdal.

The Warisan president said the so-called coalitions in place did not bring about stability for the nation and reflected that the country was facing a leadership crisis.

"What Malaysia is actually facing is a leadership crisis. These coalitions are being formed and keep changing every time someone pulls a plug on the basis of race or religion or whatever is convenient.

"Party-hopping has become normal. The coalitions are not working for the country,” he said.

Speaking in Kg Tinusa in Sandakan on Sunday (May 29), Shafie said that Ampang MP Datuk Zuraida Kamaruddin quitting Bersatu to join Parti Bangsa Malaysia (PBM) on Thursday (May 26) was an example that coalitions did not work to help Malaysia.

"They are now fighting over a seat," he said, adding that it was a sign of instability.

Shafie also claimed that Muhyiddin called him two months ago to say that he had 119 MPs backing him to be prime minister again.

Shafie said that Muhyiddin had further claimed that he had discussed with PKR president Datuk Seri Anwar Ibrahim, who was agreeable to supporting him.

"I told him (Muhyiddin) if you have the numbers, you go ahead, I won't follow you," he told the Libaran crowd which was once a stronghold of his political nemesis Tan Sri Musa Aman, the former Sabah chief minister under Barisan Nasional.

Shafie reiterated that Warisan, as a multiracial party, was not planning to form a pact with its former partners Pakatan Harapan as it forced Sabah-based parties to give way for them in many of the 25 parliamentary seats in the state.

"A local party must have more MPs in Parliament; if not, it would be disadvantageous to the state," he said.

He said that Warisan would get only six seats if it had to share with Pakatan who would be asking for 19 seats.

“What voice will we have in Parliament?" he asked.

"They have all fought each other in the past, now they are sitting together. How can we trust in this kind of a coalition," he said, urging party members to prepare for the general election that could be held at any time.