On track for new train sets The Transport Minister said this was among the measures to provide good service to the people, along with upgrading the Bombardier 818 train sets that were currently in service.

The refurbishment exercise on the Bombardier 818 train fleet plying the Kelana Jaya LRT line will cost the Transport Ministry about RM800mil.

Dr Wee said the Bombardier 818 four-car train model had been operating for over 14 years, and was well due for a Level 4 maintenance, repair and overhaul (MRO).

“The Level 4 MRO is a very important exercise that will help extend the lifespan of the 818 train model.

“For this, we need to spend and allocate RM800mil to undergo the midlife refurbishment exercise of the 28 four-car train sets,” Dr Wee said in a press conference at the ministry here yesterday. “I was briefed by the management of Prasarana Malaysia Bhd and Rapid Rail Sdn Bhd on disruptions to the automatic train control (ATC) system affecting the 818 four-car train fleet.

“These disruptions have caused a total of 38 emergency braking incidents between April 1 and May 5.

“From the data obtained, these disruptions are found to have been caused by problems related to the tachometer, electronic units and antenna, among others.

“Damaged components will be replaced while dynamic tests will be conducted to ensure this problem does not recur. We target this to be completed by August this year,” said Dr Wee.

On the May 20 disruption on the Kelana Jaya line that was caused by hydraulic fluid leakage of the brake system, he said refurbishment of the affected train sets was ongoing and should be completed by November.

To manage service disruptions, Dr Wee said extra buses would be added to strategic hubs like the Bangsar LRT station and the Pasar Seni hub, which would serve as alternative modes of transport if delays occurred.

On the train collision that occurred along the Kelana Jaya line last year, Dr Wee said 16 initiatives recommended by the investigation committee had been fully implemented.

The completed initiatives include five short-term and 11 medium-term moves.

“Another seven long-term initiatives are expected to be completed by the end of this year,” he said, adding that the initiatives cost the ministry RM450mil to implement.

The incident on May 24 last year saw more than 200 passengers injured after two LRT trains on the Kelana Jaya line collided in the tunnel between the KLCC and Kampung Baru stations.

The crash involved a train with passengers and another train that was driven manually. 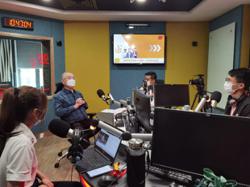