Achivements recognised: Ismail Sabri receiving the honorary doctorate for his efforts and contributions in the fight against Covid-19 from Nihon University president Kato at its campus in Itabashi, Tokyo. — Bernama

TOKYO: Prime Minister Datuk Seri Ismail Sabri Yaakob has been awarded an honorary doctorate in medicine by Nihon University, one of the most distinguished and oldest private universities in Japan.

The move was in appreciation of Ismail Sabri’s efforts and contributions in the fight against Covid-19.

He received the honorary doctorate yesterday from Nihon University president Dr Naoto Kato at its campus in Itabashi, one of the cities in the metropolis of Tokyo, during his six-day official visit to Japan.

Expressing his appreciation for the honorary degree, the Prime Minister said it was not only for him but for the entire Malaysian Family who stood in solidarity with the government in facing the pandemic.“Indeed, the award is a great recognition not only for me but for the entire Malaysian Family who has proven our ability to deal with the Covid-19 pandemic in our own way,” he said.

Ismail Sabri, reported Bernama, said when the pandemic was declared in early 2020, he was entrusted, as the then Senior Minister and Defence Minister, with the responsibility to lead the Security Cluster and chair every special meeting of ministers in the fight against Covid-19.

The Prime Minister said Malaysia was also recognised by several international agencies such as Bloomberg and Nikkei as among the top five nations in the world to have succeeded in controlling the spread of the virus.

Kato, in his citation, acknowledged that Ismail Sabri played a central role in the response to the pandemic and had given top priority to the people’s life and health. 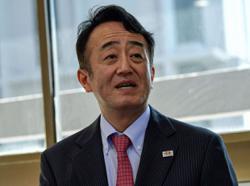