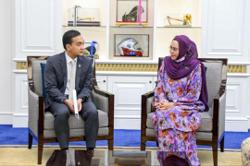 JOHOR BARU: The number of dengue cases in Johor saw an upward trend in epidemiological week 20 ending Saturday (May 21), with 82 cases against 57 in the previous week.

However, state health and unity committee chairman Ling Tian Soon (pic) said the situation was still under control with 648 cases recorded this year up to Saturday, against 1,015 cases in the corresponding period last year.

Ling attributed the spike in dengue cases in Kulai from 24 in the same period last year to foreign workers' hostels and workplaces.

“We urge manufacturers or factories in Kulai to take immediate action to address the problem and ensure that their premises are free from Aedes mosquitoes," he said.

ALSO READ: Over three million 'tweaked' mosquitoes to be released in Johor as part pilot project to tackle dengue

Ling said owners of premises found to be breeding Aedes can be slapped with a compound notice for RM500, with possible court action imposed on repeat offenders who then face a maximum fine of RM10,000 or up to two years in prison, or both, if convicted.

“Premises such as factories will also be ordered to close for cleaning purposes (if found to be) massive breeding grounds.