KUCHING: The Premier of Sarawak, Tan Sri Abang Johari Tun Openg has called upon the people of Sarawak to mobilise the digital economy to achieve its target of becoming a high-income state by 2030.

He said the digital economy, which has made an impact around the world, was important, especially in small and medium enterprises (SMEs), enabling these enterprises to be connected globally, resulting in a positive impact on the country's economy.

He said Sarawak should harness the digital economy’s huge potential as it was predicted to contribute 25% to the global Gross Domestic Product (GDP), which is equivalent to US$25 trillion, adding that according to the Statistics Department Malaysia, the country recorded RM279bil in e-commerce revenue in 2020.

"E-commerce contributed 11.5% to Malaysia's GDP in 2020 compared to 8.5% in 2019," he said when speaking at the Ramah Tamah Aidilfitri and Mantar Gawai Dayak event hosted by the Sarawak Multimedia Authority here Monday (May 23).

"Hence, we must further strengthen Sarawak's digital economy, we must accept new technologies such as Artificial Intelligence (AI), 5G, Internet of Things (IoT), Cloud, Blockchain, Big Data, the latest technology and others that will drive economic development," he added. - Bernama 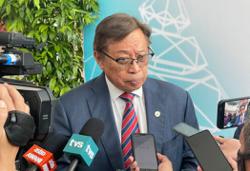