KUCHING: Sarawak is the first state in Malaysia to have legislation regulating carbon storage and the reduction of carbon emissions following amendments to the state Land Code.

The state legislative assembly passed the Land Code (Amendment) Bill on Wednesday (May 18) after it was debated by 17 assemblymen.

The amendments, among others, sought to regulate and control the use of land for the storage, retention, capture and sequestration of carbon dioxide and other greenhouse gases as part of measures to mitigate climate change and global warming.

Carbon sequestration is the process of capturing and storing carbon dioxide from the atmosphere.

She said the carbon dioxide and other greenhouse gases from industries would have to be captured, compressed, transported and stored underground or in other secure facilities.

"The amendments would empower the State Planning Authority to approve sites, both on land and offshore, to be used for carbon storage.

"Once approved by SPA, licences will be issued for the land to be used as carbon storage sites," she said when tabling the Bill.

She also said rules would be drawn up on the trading of carbon credit generated from carbon storage based on international standards.

"With this law in place, foreign investors would find Sarawak a good investment destination with well-regulated facilities for them to comply with international laws on reducing carbon emissions," she said.

"The carbon capture, utilisation and storage industry could also create up to 10,000 new jobs in Sarawak," she said.

The Bill also amended the definition of "land" to include the airspace above the land, in line with Section 44 of the National Land Code.

Sharifah Hasidah said this would give the state government control of the airspace and any matters within the airspace, such as spectrum.

"This amendment would enable the state government to ensure that spectrum in the airspace of land in the state would be regulated and used in accordance with plans to establish or improve statewide telecommunications infrastructure to support the economic transformation of Sarawak under the post-Covid development plan," she said. 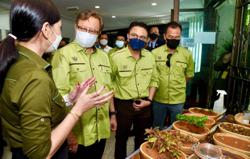