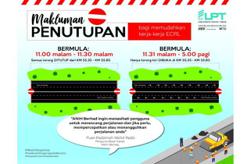 He said certain quarters had been spreading slander on the ECRL project and its ownership status as part of a “malicious propaganda”.

“Speculation that the ownership of assets and lands along the ECRL alignment will be transferred to China is completely unfounded.

“The ECRL assets are 100% owned by the government of Malaysia through Malaysia Rail Link Sdn Bhd (MRL) and the lands along the ECRL alignment are non-transferable railway reserves.

“The repayment plan to the government-owned Bank of China for projects also does not involve the transfer of ECRL assets or lands.

“It must be stressed here that MRL is the owner of the ECRL project and assets, while China Communications Construction Company Ltd (CCCC) is the main contractor.

“I see these allegations as malicious propaganda by certain parties, with a similar narrative to the criticisms of the Forest City development project and the Proton-Geely joint venture.

“Their narrative is that foreign countries are controlling Malaysian assets and that national sovereignty is jeopardised.

“These are not just slander, but they also tarnish Malaysia’s image globally. Worst of all, they can erode the confidence of foreign investors towards investing in Malaysia,” he said in a video posted on Facebook.

In the video, Dr Wee addressed several allegations made against the ECRL project.

He said in the memorandum of understanding (MOU) signed between MRL and CCCC, the agreement was for a joint venture company with 50:50 ownership to be established and appointed as operator of ECRL.

The MOU stated that 80% of the operating profit would be owned by MRL, and the balance would go to CCCC, he said. Both, however, will equally bear any operating losses.

“This proves the confidence of China in the prospects of ECRL’s operations which will guarantee quality and sustainability of its service,” he said.

Dr Wee added that the MRL is actively formulating a long-term plan to generate revenue which can sufficiently cover the company’s operating costs.

“Any profits from MRL’s train operations and side businesses will be used to repay part of ECRL’s project loan liabilities.

“The benefits generated from the ECRL project will spearhead rapid economic development in the east coast states with the availability of rail services. The cost of freight transportation to and from the east coast will also decrease up to 50%. “All this will increase the competitiveness of east coast states and create new industries, which in turn will generate revenue through government taxes.

“This will then be returned to the people,” said Dr Wee, adding that the opposition’s criticism of the project means they are denying east coast states a chance to enjoy the project’s benefits.

On the proposed fares for ECRL, Dr Wee said it is under the jurisdiction of the Land Public Transport Agency (APAD) and assures it will be reasonable and “people-friendly”.

On the decision to make ECRL a single-track railway, Dr Wee pointed out that this was agreed upon in 2019 when Pakatan Harapan was government.

“For the record, the construction consultant of the ECRL project has concluded that a single-track network is adequate for at least the first 10 years of operation, based on the projection of cargo and passenger traffic,” he said.

“The construction of nine ‘passing loops’ along the ECRL alignment will also enable the operation of two-way trains between the east coast and the Klang Valley,” said Dr Wee.