"If we have to say who won, it is the rakyat as we could see how both the leaders were facing off, discussing the important issues of the country.

"Najib's presentation was slow in the beginning but at the end he portrayed a firm character which was convincing, while Anwar was smart in using the right analogies which is an integral part and something he has been fighting for a long time such as rural issues and the poor," Astro Awani quoted him as saying.

Mohd Azizuddin, who is lecturer for Universiti Utara Malaysia, said the duo was interesting, with different approaches but convincing and that it was up to the people to assess and choose who was better.

"It was clear in the 90-minute debate, both were focused in their presentation on managing the economy based on their perspectives.

"This debate culture is a positive development at a time when the country's politics is becoming more democratic, although it needs holistic cooperation from various parties.

Mohd Azizuddin said it would be good if more issues were debated and not only confined to economics and politics which would be good to educate and open the minds of the people.

The media too, he added should play its role not only as a platform provider but also as a fact checker which was practised in other countries such as the United States, with the cooperation of academics.

The two politicians debated on two topics - whether the government should assist ailing the oil and gas company Sapura Energy Bhd and the issue of Malaysia's future in terms of its economy, politics and direction. 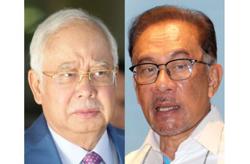