Outriders put out of action GEORGE TOWN: Two police outriders, who escorted a private vehicle believed to have been driven by the son of an MP, have been transferred to the administrative department pending investigations.

Penang police chief Comm Datuk Mohd Shuhaily Mohd Zain said internal investigations showed that no orders had been issued by superior officers to the duo to act as outriders for the vehicle.

“The act of performing duties without official instructions either from senior officers or task supervisors is a serious offence,” he told a press conference at the state police contingent headquarters here yesterday.

He said that under the standard operating procedure (SOP) of the Traffic Investigation and Enforcement Department (procedure for arranging traffic and opening traffic routes), the formal application approval process to the department for escort riders must be done within seven days unless there were emergencies.

Comm Mohd Shuhaily added that there would be no compromise when it involved misconduct and violation of SOP by officers.

He said police had contacted the driver of the car, believed to be in his 20s, to come forward to have his statement recorded.

“We have asked the individual to step forward to facilitate investigations under the Communications and Multimedia Act 1998 to see if there were any elements of tarnishing the image of the police,” he added.

The video recorded at 8.36pm on Saturday was uploaded on Facebook by a user named anwarazeez.

It shows a man at the wheel of a private vehicle being escorted by two traffic policemen.

The video also shows a policeman appearing to stop an oncoming car intending to make a turn, allowing the vehicle to run the red light.

The car having the right of way abruptly braked, causing the vehicle behind it to also stop suddenly to avoid a collision.

Traffic cops who 'escorted' private car acted on their own, now on desk duty pending probe 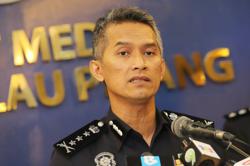