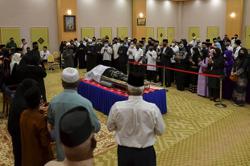 Ismail Sabri arrived at the house and spent about 20 minutes paying his last respects and meeting Ali’s family members yesterday.

Ali, 66, who served as the 13th chief secretary to the government for six years from 2012, died at Dublin Hospital, Ireland, on Thursday.

The flight carrying Ali’s remains arrived at the Kuala Lumpur International Airport at about 6.30am, before being taken to his residence at about 8.30am.

The remains were taken to the Tuanku Mizan Zainal Abidin Mosque, Precinct 3, here, for the last rites at the Sheikh Daud Al-Fathoni Hall before the burial at the Precinct 20 Muslim cemetery.

The mood at the mosque was sombre with more than 500 family members, civil servants and friends in attendance.

Mohd Zuki described Ali Hamsa as his teacher in the civil service, adding that Mohd Sallehhuddin was also Ali’s “student”.

“Tan Sri (Ali) was a teacher; he imparted a lot of knowledge to us and InsyaAllah (God willing) all his deeds will never be forgotten,” he said.

“On behalf of the civil service, I would like to extend our condolences to his family. We pray that his soul would be placed among the righteous,” he added.