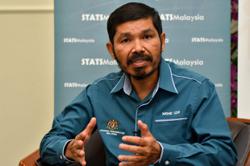 KUALA LUMPUR: With only a few days to go before the start of the holy month and the transition to the endemic phase, the Klang Valley is readying itself for the Ramadan bazaars with Covid-19 protocols in place.

In the capital city, 72 Ramadan bazaar sites have been earmarked by the Kuala Lumpur City Hall (DBKL) this year.

Federal Territories Minister Datuk Seri Shahidan Kassim said there will be some 5,000 trading lots in total.

“The usual Covid-19 standard operating procedure (SOP) will apply at these bazaars.

“This includes the wearing of face mask and physical distancing among traders and customers,” he said after visiting a new trading site in Jalan Gelenggang, Bukit Damansara here, yesterday.

When asked if there would be any specific SOP such as giving numbered tags to customers and spacing apart the stalls, Shahidan said his ministry would recruit volunteers instead.

“These people will act as community ambassadors to spread awareness of the importance of SOP at Ramadan bazaars,” he said.

At press time, there were no guidelines for Ramadan bazaars on the National Security Council’s website.

The fasting month for Muslims is expected to start on April 2.

‘’There are still bazaar applications coming in and we are processing them.

“Some of the confirmed bazaars include the popular ones in Taman Tasik Permaisuri, Kampung Baru, Taman Tun Dr Ismail and Flat PKNS, Jalan Kuching,” he said during an interview session with the regional radio station KLFM yesterday.

Visitors and traders are urged to comply with the SOP in place or risk being fined.

“DBKL and other agencies like the police and officers from the Health Ministry will monitor the SOP compliance at different bazaars.

“’If we find traders not adhering to the SOP, we will advise them and if they do it again, we will compound them.

“Repeated lack of SOP compliance might result in the closure of the Ramadan bazaar while deposits of the bazaar organisers to DBKL, ranging from RM200 to RM1,000, will also be forfeited,” said Khairul Anuar.

Meanwhile, in Petaling Jaya, only 79% of the Ramadan bazaar lots have been taken up in the 20 areas allocated for the bazaars, said Petaling Jaya mayor Mohamad Azhan Md Amir.

The council has allocated 776 lots this year but only 611 applied for these lots, he revealed.

He said that as a crowd control measure, MBPJ will be introducing the infrared system to conduct headcount at two Ramadan bazaar locations.

“The system will be available at the SS6/1 Kelana Jaya and Section 4 Kota Damansara Ramadan bazaars.

“It will also be able to detect that there are no more than two people at a bazaar lot at any one time,” he added.

MBPJ, said Mohamad Azhan, will only allow a maximum of 30 bazaar lots in one area and only 60 customers will be allowed to enter the bazaar at one time.

Last year, MBPJ recorded 211,026 Ramadan bazaar visitors in the city. The information was gathered using the records through the MySejahtera application.