Khairy: International travellers to be issued a traveller’s card once borders reopen

SEPANG: International travellers will be issued with a traveller’s card to ensure safe and seamless travel once Malaysia fully reopens its borders this coming April 1, says Khairy Jamaluddin.

The Health Minister said his ministry has been working closely with the Transport Ministry to ensure safe and seamless travel once the borders reopen.

"It will be a pre-departure condition for travellers intending to visit the country to download the MySejahtera app and upload their test results and fill in a form.

"They will then be issued a traveller’s card on the MySejahtera before being allowed to board the aircraft at the port of origin," said Khairy after accompanying Transport Minister Datuk Seri Dr Wee Ka Siong during a visit to KLIA International Airport on Saturday (March 19) to check on preparations being made to receive travellers when borders fully reopen on April 1.

On March 8, Prime Minister Datuk Seri Ismail Sabri Yaakob announced that the country would reopen its borders to travellers as the nation moves into transition to the endemicity phase.

Visitors and Malaysians who have been fully vaccinated against Covid-19 will no longer have to quarantine when they arrive.

They must, however, undergo an RT-PCR test two days before departure and a professional rapid test (RTK-Antigen) within 24-hours upon arrival.

Also to be introduced under a pilot project to cater for the reopening of borders, Khairy said, was the option for travellers to take a Covid-19 breathalyser test instead of the professional rapid test (RTK-Antigen).

"Travellers will have the option to take the breathalyser test at the airport instead of the RTK test which is required to be done within 24-hours upon arrival.

"We have tested the accuracy of the breathalysers, and are satisfied with the results," he said, adding that this new protocol would speed up the process of managing arrivals at the airport.

He noted that these new protocols for the reopening of borders would help travellers reduce the time spent at the airport upon their arrival.

"It currently takes about an hour to get out of the airport upon disembarking the aeroplane.

"With the new procedures, it will take between 35mins and 45mins just as how it was like before," he added.

He said the cost for the breathalyser test will be borne by the travellers themselves.

Khairy also announced that the government would no longer provide free PCR tests for Malaysians returning to the country, which was done over the last two years.

Meanwhile, Dr Wee said that the international airline operators have been informed of the new protocols for travellers intending to enter the country on April 1.

He said that the pre-departure condition imposed on travellers would ensure safety.

He noted that since the Vaccination Travel Lane (VTL) was introduced, a total of 277,800 visitors had entered the country.

He said that the reopening of the country's borders to travellers will help spur the nation's economy towards recovery.

Dr Wee, Khairy conduct inspection at KLIA to prepare for reopening of borders 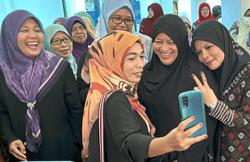