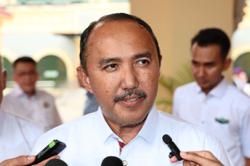 His Majesty arrived at the palace in a Rolls Royce together with security escort vehicles at around 2.54pm Tuesday (March 15).

It is learnt that incumbent Johor Mentri Besar Datuk Seri Hasni Mohammad and newly-elected Machap assemblyman Datuk Onn Hafiz Ghazi had also arrived at the palace through the back gate earlier.

Onn Hafiz is tipped to be the state's next mentri besar.

The swearing-in of the new 44-year-old MB is expected to be carried at about 3pm at Istana Bukit Serene.

Barisan Nasional campaigned in the state elections with Hasni as its MB candidate.

However, talk was rife that Hasni would have been replaced following a sudden meeting between top Umno leaders with Johor Ruler Sultan Ibrahim Ibni Almarhum Sultan Iskandar on Monday.

Hasni had also, on Monday, called for a younger person to be nominated as mentri besar, an indication that he was not in the running for the post.

The names of Hasni, Umno supreme council member Datuk Dr Mohd Puad Zarkashi and Onn Hafiz, the grandson of Umno founder Datuk Onn Jaafar, are reported to have been shortlisted for the mentri besar's post. 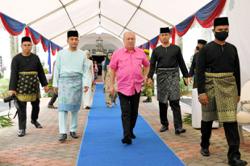 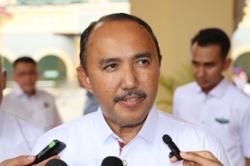