The Muar Member of Parliament said the Johor state polls, the first for Muda to contest would be a new beginning for the party.

"Muda is set to bring changes to the state.

"So let us build a united and prosperous Johor together. Come Support Muda,” Syed Saddiq posted on his official Facebook page, on Friday (Jan 28) night.

Syed Saddiq, who is Muda co-founder was earlier reported as saying that the party was formally registered by the Registrar of Societies (RoS) on Dec 23 last year.

On Jan 25, Johor Muda chairman Mohd Azrol Ab Rahani was reported to have said Syed Saddiq is highly expected to contest in the upcoming Johor state polls, adding that being a Johorean, he has the advantage.

The number of voters in Johor recorded an increase of about 28 per cent with the addition of 749,731 voters aged 18 and above, following Undi18 automatic registration, thus posing a challenge to other political parties contesting. - Bernama 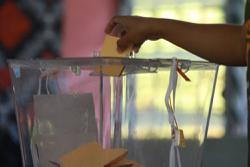