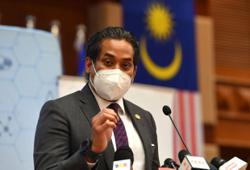 In his intervention remarks at the 150th Session of the WHO's Executive Board Meeting in Geneva, Switzerland, Khairy said Malaysia welcomed the Implementation Road Map as it would provide important guidance on the country's respective programmes in achieving NCD-related goals.

"One of the key lessons learnt in managing the Covid-19 pandemic is the effectiveness of a whole-of-nation approach.

"Similarly, in preventing and controlling NCDs, we need an all-encompassing approach at the national and sub-national levels with multi-stakeholder collaboration involving the government, civil society, private sector and local communities,” he said.

His speech text was made available to Bernama on Thursday (Jan 27).

Khairy said Malaysia would like to support the report on the political declaration on the prevention and control of NCDs.

"Although it is unusual to place so many agenda sub-items under one item, especially when NCDs contribute to the biggest burden of disease globally, Malaysia acknowledges the time allocated to discuss that important matter,” he added.

On the National Health Agenda which was launched recently, Khairy said it went beyond the usual health promotional programme as the government wanted it to result in a "Health in All Policies" approach where each stakeholder put health at the front and centre, and which would also encourage different ministries to think about their contributions to the national health agenda.

"How can the built environment and town planning lead to better health outcomes? How do agricultural policies improve the affordability of healthy foods? How do we talk about and act upon the social determinants of health outcomes? A ‘Health in All Policies’ approach is essential for better outcomes to prevent and control NCDs,” he said.

At the same time, Malaysia also agreed with WHO’s focus on engagement with all sectors of society, and Khairy said that after two years of being told what to do, populations would need constructive engagement and community empowerment to support a nation-wide agenda to prevent and control NCDs.

He added that digital tools must also be used to enhance primary health care in screening for and treating NCDs and with that, Malaysia had developed a digital application that was being used extensively.

"Because of its ubiquituousness, we have an unintended consequence of a population-wide enrolment on a digital platform. We are thinking about ways to repurpose this powerful digital platform to offer health services for NCDs and mental health, especially at the primary healthcare level,” said Khairy.

As a matter of record, he said Malaysia supported the recommendations to strengthen diabetes prevention and control and to prevent and manage obesity over the life course, the Draft Global Strategy on Oral Health, the resolution to accelerate the elimination of cervical cancer, and agreed to the Inter-Sectoral Global Action Plan on Epilepsy and Other Neurological Disorders.

Khairy said Malaysia also called on mental health to be a standalone item in future agendas as the matter deserved greater focused attention in WHO’s work, especially after the pandemic.

Like some other Western Pacific Regional Office (WPRO) countries, he said Malaysia hoped to pass a legislation this year which would bring about a generation end game to smoking.

"This is by making it illegal for the sale of tobacco and other smoking products to anyone born after 2005 and Malaysia feels that it will have a significant impact on preventing and controlling NCDs,” he added. - Bernama