Houseowner Hasmi Hassan, 56, said his wife Ruzita Abu Bakar, 53, heard a loud meowing at 3am yesterday and initially thought a male cat was trying to mate.

“However, the meowing continued. My daughter then found that a python was inside one of the three cages where 14 of our cats were kept,” he said in an interview here yesterday.

“My family is saddened by the incident and the loss of our pet cats. It’s unbelievable how such an enormous python made its way into a tiny cage with wire mesh,” he added.

He said four of his men managed to capture the python, which weighed about 20kg, in five minutes before releasing it into its natural habitat. 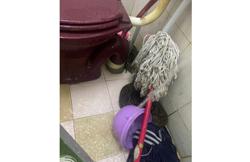