KUALA TERENGGANU: Members of the public have been advised against sharing any videos of wild animal sightings on social media to avoid threats from poachers.

Terengganu Department of Wildlife and National Parks (Perhilitan) director Loo Kean Seong said the video should instead be sent to his department to facilitate further action.

"Sharing wildlife sighting videos on social media with details such as location and time they were spotted only gives an opportunity to irresponsible parties.

"Perhaps the intention is for others to be careful with the existence of wild animals around the location but there are negative effects from sharing on social media and this must be stopped,” Loo said when contacted by Bernama on Sunday (Jan 23).

On Saturday (Jan 22) night, a video lasting 33 seconds of a tiger spotted by a driver in Paka area went viral on social media. It was posted by a man who claimed to be in Santong in Paka near Dungun, who managed to record the movement of the tiger coming out of the bush and then crossing the path used by the villagers.

Loo, however, said Terengganu Perhilitan has yet to receive a complaint from any party regarding the discovery of the tiger.

"Individuals who come across a tiger should keep a safe distance as there are possibilities of the animal to act aggressively. If they want to take video, just do it from a distance and report it to Perhilitan to facilitate monitoring,” Loo said.- Bernama 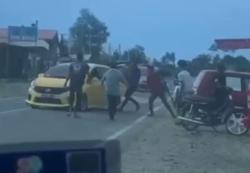