Happy Thaipusam to all

PETALING JAYA: With standard operating procedure (SOP) in place, devotees once again thronged Batu Caves in a show of religious devotion despite a scaled-down Thaipusam celebration.

Clad in saffron and yellow traditional outfits, devotees were seen carrying out their prayers while practising physical distancing and wearing face masks.

As the day went on, long lines of devotees began to grow from the entrance of the temple to the foot of the stairs.

Police and staff members were on duty to oversee and ensure SOP compliance.

No stalls were visible as per the SOP requirement set by the National Security Council. 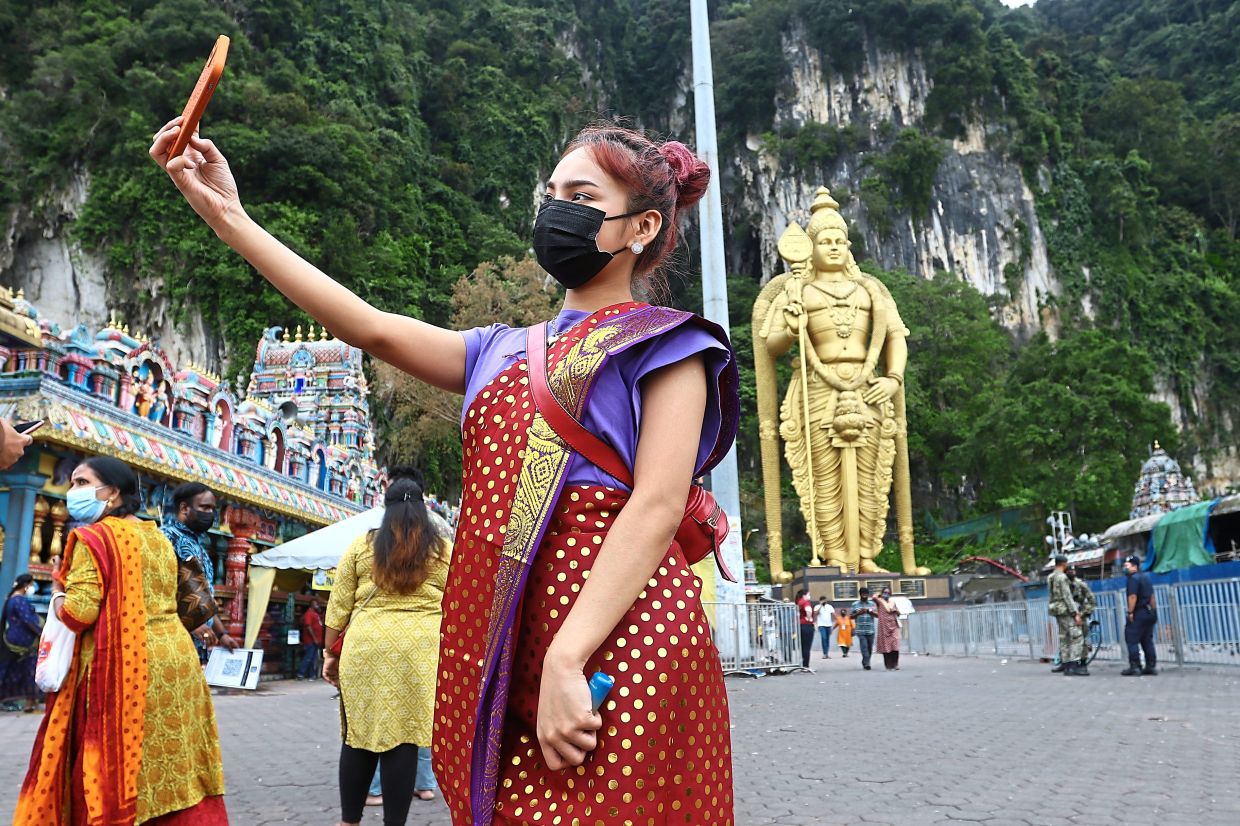 One for the album: Amira decided to spend her day off at the Sri Maha Mariamman Temple at Batu Caves to experience Thaipusam firsthand. — FAIHAN GHANI/The Star

Devotees expressed how thankful and relieved they were to have the opportunity to celebrate Thaipusam at Batu Caves.

“We weren’t able to make it here last year due to the lockdown, so being able to celebrate and carry a kavadi again makes me very happy.

“It’s also exciting to experience the sights and sounds of Thaipusam,” said devotee Francis Arputham, 35, who was there with his wife.

Devotee A. Vimal, 25, said she was looking forward to a livelier celebration next year. Keeping it clean: A temple management committee member conducting a sanitisation exercise every 30 minutes at the Arulmigu Balathandayuthapani Hilltop temple and its compound in Penang during the Thaipusam celebration. — ZHAFARAN NASIB/The Star

Another devotee P. Yuvaraj, 38, expressed his gratitude to the authorities for the way the Thaipusam celebrations were organised this year.

“Despite a smaller crowd, it does not make the celebration any less special,” he said.

Student R. Navyinthra Seelan, 24, said that to help keep his family safe during the Covid-19 pandemic, he had volunteered to represent them at this year’s prayers.

“Since older people are at higher risk, my parents decided to stay at home,” added Navyinthra, who arrived at Batu Caves at 6am with his cousin and a friend.

Malaysians of different races along with tourists also took the opportunity to witness the Thaipusam celebrations this year.

Clad in a red saree, Amira from Ampang decided to spend her day off at the Sri Maha Mariamman Temple with her husband. The 23-year old said she wanted to experience the culture firsthand.

Friends Noor Azizah, 24, and Noor Amirah, 30, who drove from Johor Baru, said they came to witness the celebrations.

International visitors also did not miss the chance to be part of the festival.

Friends Felicity Newland, 27, and Sarah Sousa, 32, from the United Kingdom and Canada respectively, said they were amazed by the vibrant and colourful festival. Clare McCusker, 33, who was last here in 2019, said despite the SOP, the celebrations were still a joy to see.

“Although it’s not as grand as before, it’s still amazing to see the people coming together to celebrate,” said the international school teacher.Thaipusam is celebrated by Hindus during the 10th month of the Tamil calendar, which is also known as “Thai”.

It is to commemorate Lord Murugan, who received the sacred spear from his mother Goddess Parvati to eliminate the demon Soorapadman and restore the people’s prosperity and well-being.

A quiet and peaceful affair, but many miss the liveliness

Devotees flock to temples while sticking to SOP