Fadillah (second from left) at the bridge opening ceremony.

DENGKIL: Works Minister Datuk Seri Fadillah Yusof (pic) has directed PLUS Malaysia Bhd (PLUS) to find a solution to the congestion issue reportedly happening at its toll plazas following the implementation of the Radio Frequency Identification technology system (RFID).

According to him, the pioneering RFID system implemented by PLUS was supplied by Touch 'n Go Sdn Bhd (TnG).

"I have contacted them (PLUS and TnG) after receiving complaints, and I have asked them to explain to the public and come out with a solution (to the problem) arising from the implementation of RFID," he said.

"When it is a pioneering project, it will face certain issues that need to be solved," said Fadillah when met by the media after observing the opening of the Dengkil Bridge at FT31 (Jalan Banting Semenyih) here on Monday (Jan 17).

Online media and netizens had claimed that the traffic at several toll plazas like at Bandar Seri Putra, Bangi and Sungai Besi had become congested following the implementation of RFID.

On Dec 16, 2021, the Ministry of Works said toll transactions using RFID technology for private light vehicles (Class 1) would be implemented at the Juru route in Penang to Skudai in Johor on the North-South Highway starting Jan 15, 2022.

RFID allowed highway users to enjoy a smoother journey without having to stop in RFID lanes at a speed of 30 km/h through touchless toll transactions.

It also offered digital cash security and cashless top-ups through the use of Touch ‘n Go eWallet without having to visit top-up counters.

Fadillah said the implementation of RFID was a pilot project with a limited number of toll plazas installed with the facility, and as such the TnG and SmartTAG lanes were still maintained.

"We have not made it compulsory for highway users to use RFID," he said. - Bernama 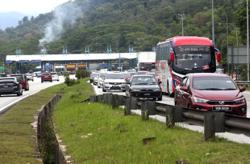 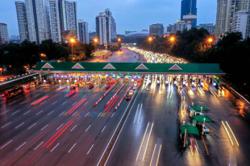