Among the highlights in the manifesto are to ensure native customary rights (NCR) and native territorial domain titles were upheld and acknowledged.

“This 34-point manifesto is very comprehensive and will ensure the rights and welfare of Sarawakians are upheld, and the future of the state can be developed.”

GPS also pledged to set up a sovereign wealth fund, conserve the environment and improve the efficiency of disaster management, said Abang Johari.

He said at the same time, it seeks to ensure that the state government is governed by an administration that is based on integrity and good governance.

Other highlights in the 34-point manifesto are to eradicate urban and rural poverty, to prepare more affordable homes, to continue the resettlement scheme, and assistance to build and improve longhouses across Sarawak.

“GPS has prepared a very firm landscape to develop Sarawak towards a high-income and developed state status by 2030,” said Abang Johari.

“Various initiatives have been planned and are being implemented to ensure that its people can enjoy the prosperity of its economy and an inclusive social development in a resilient environment driven by data and innovation,” he added.

The ceremony was a scaled-down affair in compliance with Covid-19 standard operating procedures, and party members followed the launch via live stream.

The theme of the manifesto is "Ensuring Stability, Prosperity and a Glorious Sarawak".

Meanwhile, Abang Johari said GPS’ ability to implement various programmes in its administration of the state government is a testament that the coalition has a strong administration.

Abang Johari pointed out that Opposition parties have no track record in developing the state.

He said when they were part of Putrajaya under the former Pakatan Harapan administration, many development projects in the state were cancelled and allocations rescinded.

“When this happened, GPS came forward by continuing the implementation of the projects that were cancelled by using state government allocations,” he said.

Abang Johari said GPS has implemented more than 100 game-changer initiatives that spurred socio-economic development in the state and brought benefit to the people.

The state also carried out an initiative to erect 300 telecommunications towers which are expected to be ready next year to boost the Internet in the state.

“When people were affected by the Covid-19 pandemic, GPS gave much-needed aid to the people through seven packages under the Bantuan Khas Sarawakku Sayang special aid worth RM5.3bil,” said Abang Johari.

“The future of Sarawak lies in the hands of the people of Sarawak. We developed the state using our own mould and only we can ensure prosperity goes down to every Sarawakian,” he added.

“As the people of Sarawak, it is our responsibility to choose a government that is caring and responsible in facing challenges in the future and at present,” he said. 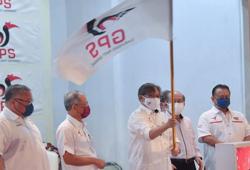 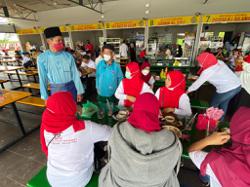