PETALING JAYA: Malaysia Airlines (MAS) Flight MH370 which went missing seven years ago is trending on social media after a British aeronautical engineer claimed that the spot where the plane crashed has been found.

According to the BBC, Richard Godfrey believed he had managed to find the plane's final location.

He claimed that the plane crashed into the Indian Ocean 2,000km west of Perth, Australia.

The report stated that Godfrey had combined different data sets from separate domains.

"No one had the idea before to combine Inmarsat satellite data, with Boeing performance data, with oceanographic floating debris drift data, with WSPR net data," he told the BBC.

Godfrey claimed that the wreckage could be behind a cliff or in a canyon on the ocean floor.

"You need maybe three or four passes before you start to pick things up. The wreckage could lie as far as 4,000 metres deep," he had said.

The BBC noted that Godfrey was a founding member of the MH370 Independent Group.

In a separate interview with Australian breakfast show programme Sunrise, Godfrey also said that he was "very confident" he had found the plane.

He also alleged that the crashed plane was an "act of terrorism and hijacking" but was open to other theories if the authorities shared more information.

In 2014, MH370 was on its way from Kuala Lumpur to Beijing with 239 people on board when it disappeared from radar.

The search for the missing plane has so far been futile.

An earlier search led by Australia in the Indian Ocean failed to locate the missing plane, causing it to be called off in January 2017.

US exploration firm Ocean Infinity also resumed the search in 2018 on a "no find, no fee" basis but was also unsuccessful. 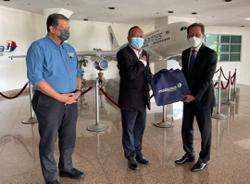