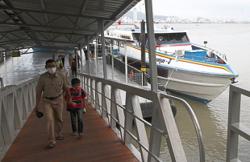 GEORGE TOWN: Penang's fast boat ferry (catamaran) for pedestrians has received positive response since its January launch with a total of 357,898 passengers as of October.

"The service is perceived to have received encouraging response based on ridership records submitted to the state each month," Penang infrastructure committee chairman Zairil Khir Johari told the state assembly on Wednesday (Dec 1).

"The increase in ridership is also consistent after the state allocated a fare subsidy for all pedestrians from July.

"The service has also received positive feedback from users who say it is more comfortable, safer and faster compared to the old ferries," he said in reply to Muhammad Faiz Fadzil (PH-Permatang Pasir), who asked about the ferry's ridership and response from users since its launch.

On Jan 1, Penang’s ferry service entered a new era with two fast boats for pedestrians and one of the old ferries retained for two-wheeled vehicles only.

The ferry service is now under the administration of the Penang Port Commission.