KOTA KINABALU: The closure of the Mara polytechnic college in Semporna is a tough but inevitable decision, says Datuk Seri Mahdzir Khalid.

The Rural Development Minister said this was due to the high accumulated losses of about RM28mil over the past few years following a drop in student intake.

“We are in a dilemma because this is an educational institution for students, especially Bumiputera,” he said during an event here on Tuesday (Nov 30).

Mahdzir said the college could take up to 600 students but there are only 96 left.

“The operational costs including staff salaries have to be paid and maintenance is very high,” he said.

He said although Mara is federally funded, the college is considered a private entity and funds must be sourced.

The matter was highlighted in the Dewan Rakyat on Nov 23 after Sepanggar MP Datuk Azis Jamman asked the ministry about the closure and reasons behind it.

The college will be fully shut on July 31 with the remaining students transferred to other Mara polytechnic colleges in Peninsular Malaysia.

The staff will be relocated to another polytechnic in Peninsular Malaysia or choose to end their services via a voluntary separation scheme.

Earlier in the event, Mahdzir witnessed the launching of a proposed high end condominium development project by Mara Inc Corporation, which is expected to cost over RM 500mil.

It is expected to start construction in the first quarter of next year.

"Kota Kinabalu is a prime location for tourists," he said, adding that it was part of the Malaysia My Second Home programme to lure foreign investors into Sabah.

Chief Minister Datuk Seri Hajiji Noor, who officiated at the event, hoped more affordable housing would be built so that all Sabahans could have the opportunity to own houses.

Some 2,000 job opportunities are expected to be created from the project. 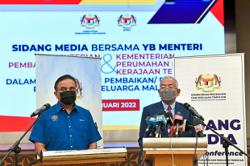