BRINGING COLOUR TO MALAYSIANS SINCE 1978 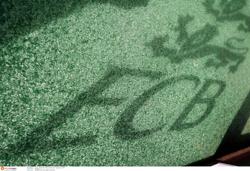 FIRST coined by Russian scientist Constantin Dmitrievich Perskyi in 1900, “television” has become synonymous with broadcast and media in the last century.

As one of the most common home appliances, it has managed to change the way information is transmitted and how we consume information. In a way, it unlocked a new way for people to perceive a world beyond their front yards.

Television, or TV for short, has become so ingrained in the lives of families, that for many it’s become a tradition to sit in front of the TV to catch up on the latest news and entertainment shows.

Together, viewers have witnessed tragedies like 9/11, the loss of MH370 and crowning achievements like our victorious 1992 Thomas Cup win. 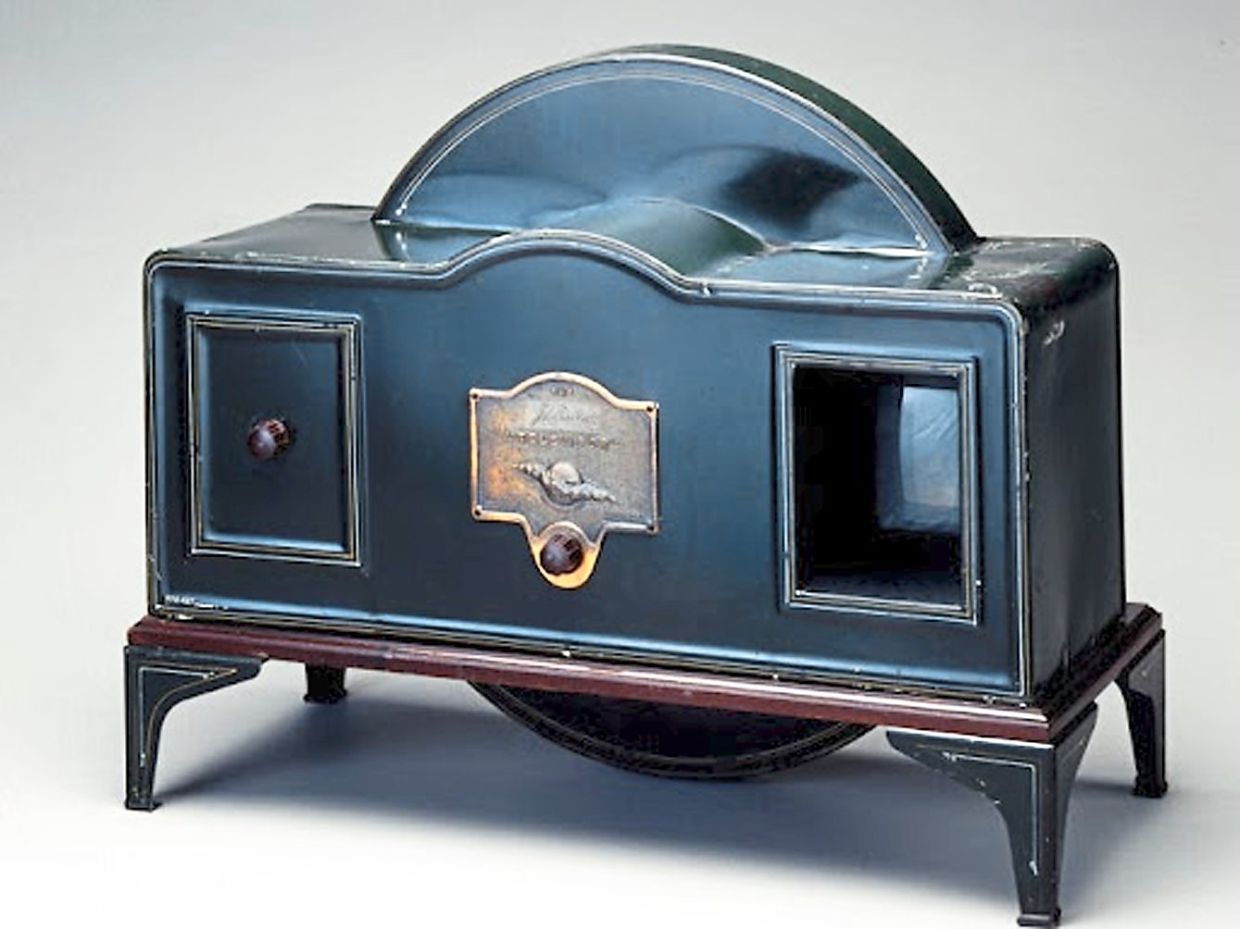 In 1925, Baird demonstrated his invention to the public by successfully transmitting an image of a ventriloquist’s dummy.

We celebrate World Television Day (Nov 21) not for the appliance itself, but rather the philosophy which it represents – a symbol for communication and globalisation in the contemporary world we live in.

Precursor to a bigger, clearer picture

While the word itself has existed for a long time, the modern idea of a TV set was only conceived in 1925 when Scottish engineer John Logie Baird conducted a demonstration in England.

The Baird Televisor, as it came to be known, was basically made from scrap materials like cardboard, bicycle lamps, glue, string and wax.

Funnily enough, we might not have had this information revolution since the father of TV himself nearly died as he accidentally bumped into an electrical cable when he tried to increase the current running into the TV to get a clearer picture. 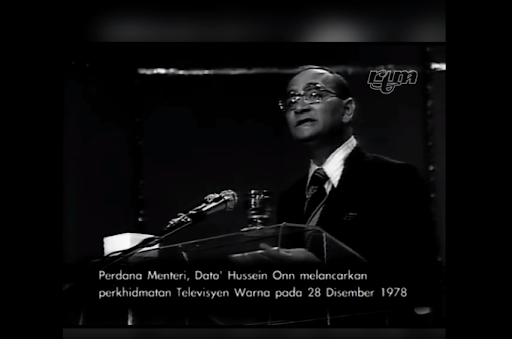 Malaysia’s third prime minister, Tun Hussein Onn, at the launch of colour TV by RTM in 1978.

Meanwhile, local free-to-air (FTA) television broadcasting was first introduced to the masses in Dec 28, 1963 and firmly established itself as an important arm in documenting the Malaysia’s history.

From the days of former prime minister Tun Hussein Onn, colour TV was introduced stage-by-stage from Dec 28, 1978 on Radio Television Malaysia (RTM), until the instalment of full-time colour transmissions which were officially inaugurated on New Year’s Day in 1982, phasing out the retro black and white TV shortly after.

Since then, the local broadcasting landscape changed rapidly and grew tremendously.

Apart from Astro, Unifi TV (or previously known as Hypp TV), is another IPTV service operated by Telekom Malaysia (TM).

Launched in 2010, this service was offered along with other services such as VoIP (voice over Internet protocol) telephone, Internet and IPTV – proving that TV and broadcast remains strong in the country.

In this new age of digitalisation, the field of broadcasting is undoubtedly evolving in tandem with technological advancements. The transformation of traditional media, like TV, in both practicality and ideology has impacted social change in the country.

The digital switchover, also known as analogue switch-off, was one of the primary initiatives under Malaysia’s Digital Transformation Agenda, to push the nation toward digitalisation while gaining digital dividends.

In its place came digital terrestrial TV (DTT), a government initiative spearheaded by the Communications and Multimedia Ministry (KKMM) and monitored by the Malaysian Communications and Multimedia Commission (MCMC). The initiative was aimed at ensuring a smooth transition from analogue to digital broadcasting on a terrestrial platform for the existing FTA government-owned and private TV stations.

The main characteristic of DTT broadcasting is that the technology uses much less spectrum as compared to analogue broadcasting. You can think of a spectrum as a range of frequencies like that of FM radios.

As of today, Malaysians are able to enjoy 18 TV and 14 radio channels on myFreeview without any subscription fees. 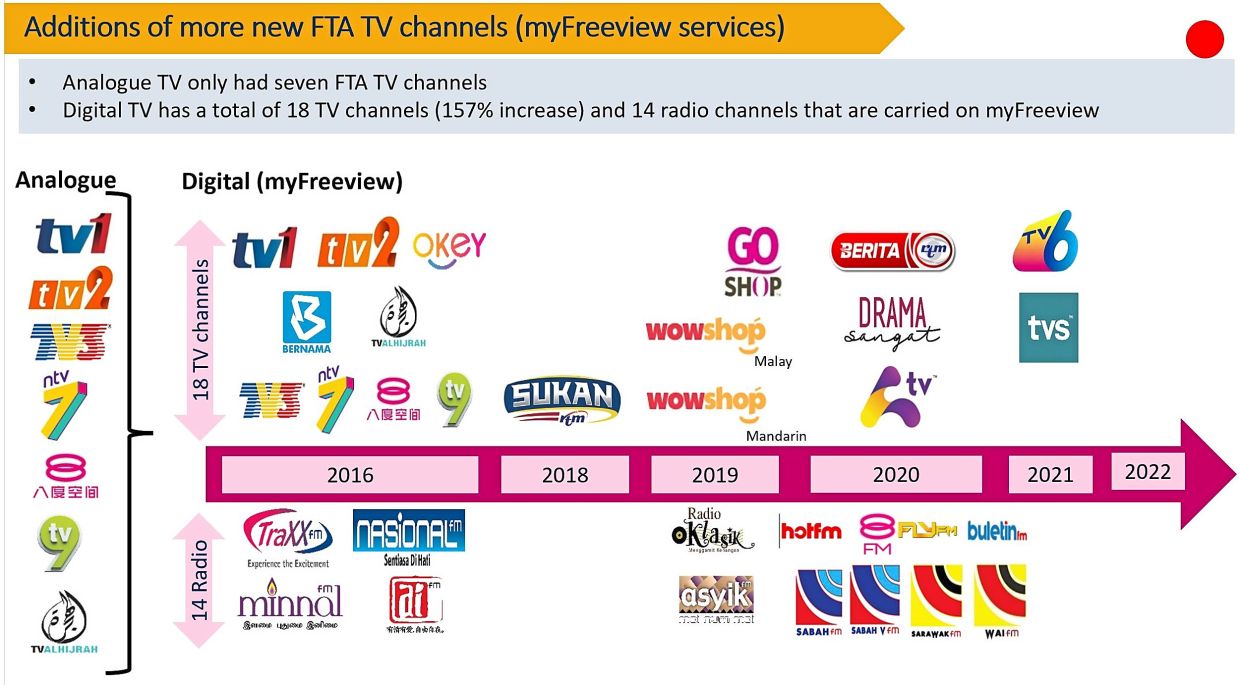 Covid-19 and the role of TV

It goes without saying that the Covid-19 outbreak accelerated the pace of technology adoption and changed the daily lives of viewers. People embraced technology more than ever to overcome all aspects and consequences of the lockdown in isolation.

The ways in which people spent their leisure time changed because of the pandemic and social distancing measures. More people watched and listened to the news, to be kept informed of updates on the Covid-19 situation. Entertainment, learning and shopping on digital platforms also saw an increase.

More notably, media played a crucial role in disseminating accurate and trusted information about Covid-19 responses and protocols. For instance, TV was identified as an important medium in providing reliable information during the lockdown for those seeking familiar and safe content.

More than ever, local broadcasters lent a sense of normalcy in an unprecedented time for Malaysians stuck indoors. From listening to updates by our health director-general, to tuning in to former prime minister Tan Sri Muhyiddin Yassin’s announcements on the country’s recovery plan, it kept people connected. 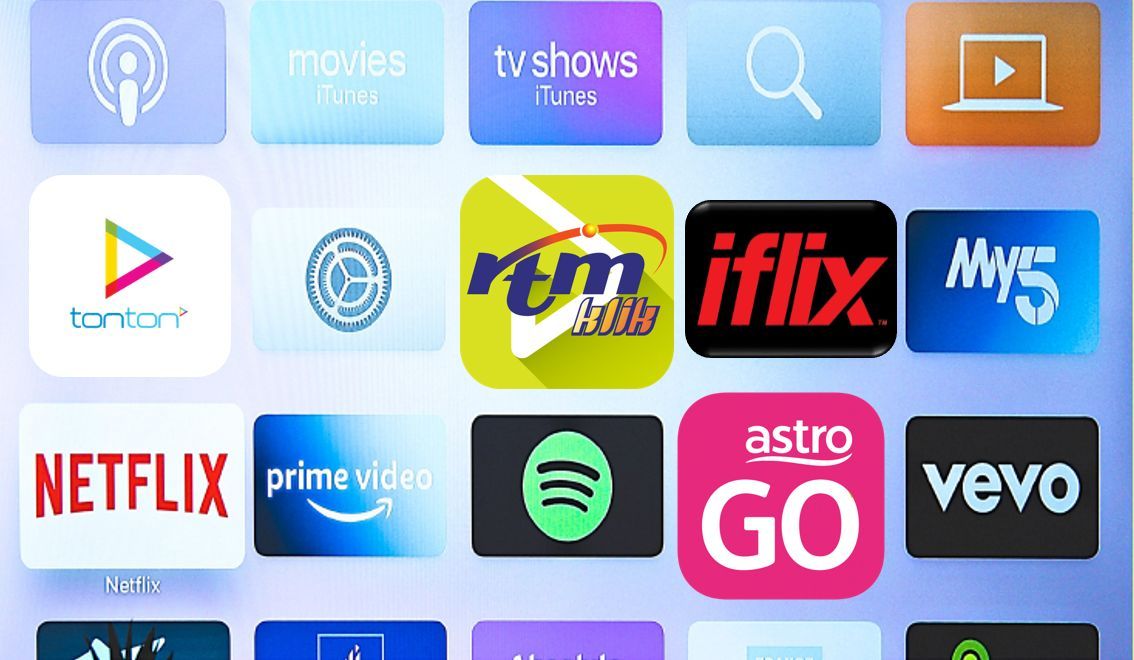 Streaming and on-demand services give viewers flexibility of schedule and device of choice.

What’s the future of TV?

The future of TV is in the growth of streaming and on-demand services. Gone are the days where viewers wait around every week for their favourite show to air at a certain time and instead, they will be able to watch what they want, when they want.

Covid-19 served as a catalyst for streaming services, driving homegrown media companies to explore the streaming space to provide viewers in lockdown with more binge-worthy content.

Movement restrictions during the Covid-19 pandemic led to consumer behavioural shifts in media consumption. A study by Nielsen found an average increase of 30% in TV viewership since the first movement control order (MCO) was imposed on March 18 last year.

Video consumption on online platforms also grew significantly during this period, whereas channels like Astro GO and Tonton reported a huge surge in daily active users in the third week of March last year too.

The same study by Nielsen also showed that streaming usage across all television homes has climbed to 26% of all time spent on TV. Streaming and broadcast accounted for half of TV time, with usage split evenly between the two channels.Local broadcasters like Astro have already chanced upon this trend with four OTTs under its belt – Astro Go, iQIYI, HBO GO, and Disney+ Hotstar. The expected launch of their latest OTT, Sooka, looks at targeting vernacular content and premium live sports that millennials consume on the regular.

Smart TVs are also taking homes by storm with experts predicting the number of smart TVs installed worldwide this year reaching one billion units, with artificial intelligence and the Internet creating a more personalised viewing experience for each viewer.

The advancement of broadcasting technologies has also affected viewers’ preference on TV screens. Nowadays, you can get smart TVs that display in HD (high definition) or UHD (ultra high definition) with resolutions from 4K up to 8K – a far cry from the days when you would struggle to even get a clear image on screen.

Moving forward, industry-led collaborations and projects to spur the growth of the industry are expected to bloom.

By evolving with technological trends and shifts in consumer behavior, future robust regulatory frameworks will help to bolster local content to be exported to international and domestic markets while attracting investors, ensuring the longevity of the TV and radio broadcasting industry.

IN recognising the increasing impact television has on decision-making by bringing world attention to conflicts and threats to peace and security plus its potential role in sharpening the focus on other major issues, including economic and social issues, the United Nations General Assembly proclaimed Nov 21 as World Television Day (through resolution 51/205 of Dec 17 in 1996).

On Nov 21 and 22 of 1996, the United Nations held the first World Television Forum, where leading media figures met under the auspices of the United Nations to discuss the growing significance of television in today’s changing world and to consider how they might enhance their mutual cooperation.

Following that, the General Assembly decided to designate Nov 21 as World Television Day, acknowledging the TV as a major tool in informing, channeling and affecting public opinion.

Malaysia’s first and oldest broadcaster, Radio Televisyen Malaysia, was established on April 1, 1946 as Radio Malaya. This year, it celebrates its diamond jubilee.

Check out more info about RTM’s history on their website at https://rtm75.rtm.gov.my/.

Two new TV channels were launched on the myFreeview platform by public and private broadcasters in 2020. Saluran Berita RTM is a 24-hour news channel on myFreeview channel 123 providing a variety of content comprising the latest news and talk shows to enrich the public with accurate information.

Awesome TV, which provides various entertainment in the form of local and international contents including comedy, drama, talk shows, as well as cartoons for children, went officially on air on myFreeview channel 112 on Aug 3.