Work together to ensure demands of Sabah and Sarawak are met instead of finger-pointing, Ongkili tells MPs 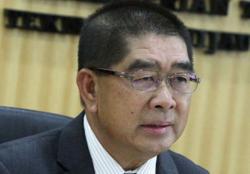 “We need to be careful of this, especially under the current government which upholds the Keluarga Malaysia (Malaysian Family) slogan. Instead of finger-pointing, we should work together and ensure that our voices are heard and demands met,” the Minister in the Prime Minister’s Department (Sabah and Sarawak Affairs) said in his winding-up speech on Budget 2022 in Parliament on Monday (Nov 15).

Ongkili was referring to Sepanggar MP Datuk Azis Jamman’s recent debate speech describing the Budget 2022 as unfair towards Sabah and threatened that if the bad treatment continues, Sabahans should not be blamed for seceding Malaysia if they felt that Putrajaya’s “colonialism” grew stronger.

“I know you have good intentions, but it is dangerous to say that Putrajaya jajah (colonises) us. However, if you believe it is true (being colonised), provide us with proof.

“File your charges if there are non-compliances in the agreement with the Special Council on Malaysia Agreement (MKMA63), which is chaired by Prime Minister Datuk Seri Ismail Sabri Yaakob, and chief ministers of Sabah and Sarawak and eight senior leaders as members.

“This is part of the MKMA63’s purpose, to study and check for non-compliances, many of which have been addressed and settled,” Ongkili said.

He said it was unfair to raise such an accusation without supporting it with proof, and it could be construed as an act to purposely stir sentiments and create confusion among the public.

“The MKMA63 is the best platform to raise this issue. Lodge a complaint to the respective Chief Minister so it can be tabled during the council’s meeting for deliberation. Do it professionally because you are the people’s representative,” he said.

He said the Sabah and Sarawak Affairs Division was also set up to listen to public grouses and voices.

On another development, Ongkili also told Parliament that further discussions on the four oil and gas-related matters - oil royalty and cash payment for petroleum; oil minerals and oil fields; as well as the Territorial Sea Act 2012 and Continental Shelf Act 1966 - are temporarily put on hold to make way for the commercial solution pertaining to the on-going deliberation on oil and gas between the Sabah and Sarawak governments and Petronas.

“Currently, the current rate for the special grant under Article 112D of the Federal Constitution is based on the amount stated under the Special Grant Order (First Reading) in 1969, where the last amount was RM26.7mil for Sabah and RM16mil for Sarawak,” added Ongkili, who is also the Kota Marudu MP.

On a further question from Isnaraissah, Pulai MP Datuk Seri Salahuddin Ayub and Sibu MP Oscar Ling Chai Yew, Ongkili explained that issues pertaining to the upgrade work on roads and other infrastructures, water and electricity supplies, and dilapidated schools in Sabah and Sarawak are under the Economic Planning Unit for documentation and submission into the 12th Malaysia Plan.

Ongkili, in responding to Tuaran MP Datuk Seri Madius Tangau, also told the House the Prime Minister’s Department (Parliament and Law) and the legal teams under the MKMA63 Equal Partner Working Committee is ironing out the matter further which would look into the authorising autonomy power to the Sabah and Sarawak Head of States to appoint its Judicial