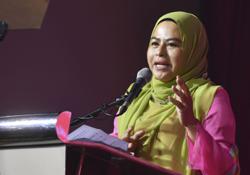 "As of Sept 30 this year, about 2.4mil borrowers have completed their studies and should have begun repaying their loans amounting to RM24.6bil,” said Noraini.

"Of this, some 77.5% have started repaying their loans with 800,000 borrowers having completed their loan repayments,” she added.

Noraini said that about 400,000 are consistently repaying their loans according to the repayment schedule while 400,000 are repaying but not consistent in their repayments.

The Higher Education Minister said this when answering a supplementary question raised by Lukanisman Awang Sauni (GPS-Sibuti) in Dewan Rakyat on Monday (Nov 15).

She added that so far, a total of RM15.5bil has been repaid.

To a supplementary question by Fong Kwai Lun (PH-Bukit Bintang), Noraini said that several incentives have been implemented to encourage borrowers to repay their study loans.

Among them, she said, was offering a 12% discount for borrowers who repay at least 50% of their loan amount.

She added that there is also a 10% discount for borrowers who agreed to repay their loans by way of monthly salary deductions.

Noraini said that PTPTN has made it easier for borrowers to repay their loans online and not only through counters.

She added that that legal action against errant borrowers will only be instituted as a last resort after exhausting all other avenues to recoup outstanding loans.