IPOH: The Perak state government will try its best to resolve the issue with the appointment system at the state Land and Mines Department where despatch riders and lawyers were forced to queue up at odd hours, says Datuk Saarani Mohamad (pic).

The Perak Mentri Besar said the state had already held discussions with the riders and lawyers to find an amicable solution.

"During the state executive council committee meeting held yesterday (Nov 3), the matter was raised and we had a brief discussion on why the department had to use the system.

"There was initially a limited quota (for the appointment numbers) and it was increased before being reduced again after a Covid-19 case was reported there," he told reporters on Thursday (Nov 4).

He had said this after visiting K. Kamalanathan, the former driver for former mentri besar Tan Sri Tajol Rosli Mohd Ghazali at his house in Desa Sri Wang in Lahat, here.

It was reported that despatch riders and lawyers in Perak had to wait between 10pm to 4am almost daily at the Land and Mines office here to get appointment numbers.

Saarani added that although the state understands the frustrations of the lawyers and riders, they also needed to comprehend that the state was still battling Covid-19.

"I was told that the office is open until Saturday.

"We are aware that many legal cases had to be put on hold due to the system, but this is what the office is capable of doing at the moment," he said.

"We will try to find a solution and will try to accommodate what was requested by the riders and lawyers," he added. 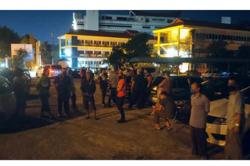