PETALING JAYA: The Caucasian woman who caused a stir at a luxury retail store here for refusing to wear a mask was given compound notices amounting to RM3,000, in accordance with the latest guidelines, says Khairy Jamaluddin (pic).

The Health Minister addressed the issue on Twitter and stated that there has been much concern about the compound amount given to the expatriate recently in a post on Monday (Nov 1).

“Comparisons have been made to earlier compounds at a higher amount.

“Following complaints earlier this year of compound amounts being too high, new guidelines were introduced.

“The case where a gentleman was compounded RM10,000 for not wearing his mask properly happened before the new guidelines were enforced,” he tweeted.

Khairy added that the RM10,000 compound notice for wearing a mask on the chin was issued on March 12, in accordance with the provisions of the Emergency Ordinance at that time.

The compound was a maximum of RM10,000 per individual and RM50,000 for organisations that violated the Covid-19 standard operating procedures back then.

On March 17, a new guideline with a more reasonable compound value was implemented.

“These guidelines were issued after the people felt the compound was unreasonable and too high.

“I would also like to remind, after the Emergency Ordinance is lifted, the value of the compound will return to a maximum of RM1,000 for individuals and corporations,” he tweeted.

In a video that went viral on the Internet, a maskless Caucasian woman was seen complaining to the shopping centre staff that the boutique worker had put his hands on her to prevent her from entering, which was denied by the employee concerned. 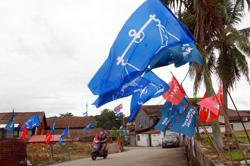 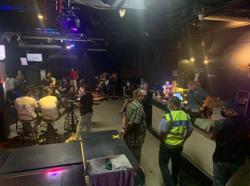