In expressing sadness over the passing of Ahmad Kamal, better known by his pseudonym Kemala, the royal couple hoped his family would remain strong in coping with the loss.

"Their Majesties pray that his soul will be blessed by Allah SWT and placed among the righteous," according to a statement on Istana Negara’s official Facebook page.

"His contributions and services to the community and country are greatly appreciated and his death is a great loss to the country, especially the literary fraternity,” the statement read.

Ahmad Kamal’s contributions were not only in Malay literature development but also brought together writers in Malaysia, Indonesia, Brunei and Singapore.

Ahmad Kamal who received the National Laureate award in 2012 and served Dewan Bahasa dan Pustaka from 1968 until he retired in 1996, was also a recipient of the Mastera (Southeast Asia Literary Council) Award.- BERNAMA 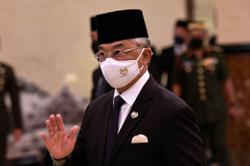