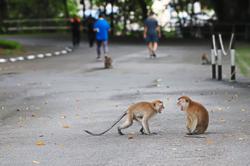 KUALA LUMPUR: A PKR lawmaker has proposed the government address the increasing population of wild monkeys by distributing birth-control pills to the primates.

Datuk Johari Abdul (PH-Sungai Petani) said wild monkeys have posed a nuisance to many villagers in his constituency and villagers are often caught in a dilemma, as killing the wild monkeys would be considered inhumane.

"I'm faced with villagers who don't know what to do. Killing these monkeys is also an offence.

"So, I would like to propose to the government to find a method, perhaps give them (wild monkeys) birth-control pills," he said when debating the Wildlife Conservation (Amendment) Bill 2021 in Parliament on Tuesday (Oct 26).

Johari also said the government should research for other ways to humanely address the issue of wild monkeys.

"We must research so we can reduce how fast wild monkeys breed," he added.

Johari then gave an account of wild monkeys disturbing villagers in his constituency, where he claimed in one instance, a monkey could open a closed-refrigerator to steal food.

"Even monkeys know how to open fridges now. They go after the eggs in the fridge and second, they always disturb kids," he said.

"I hope the government will research ways on how to reduce pregnancy among them (wild monkeys). Don't kill them cruelly."

Earlier, Johari had proposed the government for initiatives to breed endangered animals in gazetted forest areas.

"We should have a suitable location so endangered species can be bred. These places can then be converted into a tourist location," he added.