GEORGE TOWN: Teluk Bahang beach may be less popular with tourists, but this hasn’t saved the 1km beach from being trashed – literally.

In just an hour, 130 “ploggers” collected over 330kg of trash on the beach yesterday.

Aside from the huge amount of plastic bottles, containers and straws, they also found fishing nets, a tyre and countless cigarette butts.

“Plogging” is derived from the Swedish verb “plogga” which is a compound word of “plocka upp” (pick up) and “jogga” (jog).

Many Swedes carry a big plastic bag when they go jogging, picking up litter along the way, and this has become a global phenomenon.

But there was so much trash to clean up on Teluk Bahang beach that the ploggers had little energy for actual jogging.

Balik Pulau MP Datuk Muhammad Bakhtiar Wan Chik, who was present, said participants picked up 164kg of non-recyclables and 157.7kg of recyclables, along with a tyre that weighed 14.9kg.

“Cigarette butts were the most numerous. This shows that we have much work to do in terms of educating and creating public awareness about littering.

“We need to educate people who visit beaches to take responsibility.

“Whatever we bring to the beach, we bring home. We do not leave anything behind but our footprints,” he said.

Muhammad Bakhtiar said the event was held to mark World Clean-Up Day, celebrated globally on the third Saturday of September.

“I frequently check Teluk Bahang beach. Even before interstate travel was allowed, it was dirty.

“So I thought we could organise something to bring the community together for a clean-up,” he added.The event was organised by the Balik Pulau parliamentary constituency service centre with the support of Penang Island City Council, Southwest District police team, Fire and Rescue Department and Angsana Hotel.

State tourism committee chairman Yeoh Soon Hin called for a long-term solution to teach the community not to litter.

“If we have dirty beaches, we leave a bad impression and the trash even endangers marine creatures,” he said. 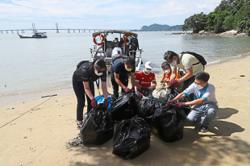