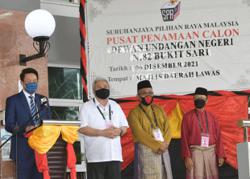 The Perikatan chairman said that the coalition could no longer wait if Barisan Nasional remained undecided to cooperate with Perikatan during the state polls.

"If there is no clear indication, we will pursue and follow the decision made at the national level.

"We are ready for three-cornered fights. This is because we are fighters (pejuang)," he said at a press conference that was aired live on his Facebook page on Thursday (Oct 21).

Umno deputy president Datuk Seri Mohamad Hasan has said previously that the party has yet to decide whether to go solo or form a pact with other parties when contesting the Melaka state election.

"That decision will be made at the (Umno) Supreme Council meeting. We will discuss the matter in detail, the recommendations of the political bureau and other views as well," said Mohamad.

Muhyiddin said that although he welcomed any form of cooperation, the political reality must also be considered.

"We actually have a decision, when it comes to nomination day, we will see what happens, whether there will be any cooperation or not.

"But Perikatan, as a coalition, is prepared for any eventualities including three-cornered fights," he said.

Asked about the impact of the three-cornered fights on Perikatan, Muhyiddin, who is the Pagoh MP, said that it will be up to the rakyat to decide.

"This is because when I look at the political situation in Melaka, the state poll was triggered by irresponsible people who caused the collapse of the state government.

"I am not from Melaka, but I have many relatives here. In actuality, since the pandemic is only starting to subside, more time should be given. Don't keep thinking about power until they affect the interest of the people.

"I know the sentiment of the Melaka people," he said.

Asked how many seats that Perikatan is going to contest, Muhyiddin replied, "please wait, we will decide on the matter soon."

A state election has been called in Melaka after four assemblymen withdrew their support for the Barisan Nasional/Perikatan Nasional-led state government on Oct 4. 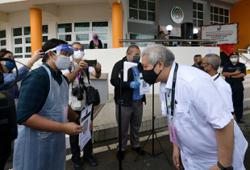 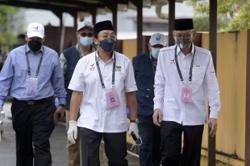