KUCHING: Sarawak’s position as an equal partner in the formation of Malaysia will be properly recognised in the newly proposed amendments to the Federal Constitution, says Chief Minister Datuk Patinggi Abang Johari Tun Openg.

He said the proposed amendments, including defining “the federation” and Malaysia Day, were comprehensive and reflected the true spirit and intention of the Malaysia Agreement 1963 (MA63).

“These amendments to the definition of ‘the federation’ under Article 160(2) are crucial and must be done so that the Malaysia Agreement 1963 and its annexures are recognised in the Federal Constitution.

“The amendments will also introduce the definition of Malaysia Day which was never before defined,” he said after receiving a courtesy call from Minister in the Prime Minister’s Department (Parliament and Law) Datuk Seri Wan Junaidi Tuanku Jaafar and Deputy Minister in the Prime Minister’s Department (Sabah and Sarawak Affairs) Datuk Hanifah Hajar Taib here yesterday.

It was previously reported that the Bill to amend the Constitution, scheduled to be tabled in Parliament at the end of this month, will redefine “the federation” as one established under MA63 and not merely the Federation of Malaya Agreement 1957.

The Bill will also seek to define Malaysia Day as Sept 16, 1963, besides amending Article 1(2) to restore Sabah and Sarawak’s status as equal partners.

Abang Johari noted that this was the second attempt to amend these Articles after a previous attempt to amend Article 1(2) by the Pakatan Harapan administration in 2019 failed to receive the required two-thirds support in Parliament.

“The Sarawak government did not lend its support to the earlier amendment because in our view it was purely cosmetic in nature and did not reflect the special status of Sabah and Sarawak as envisaged in MA63 and its annexed instruments,” he said.

Abang Johari said the courtesy call also discussed the proposed amendment to the definition of “natives” in Article 161A of the Constitution.

“With this (proposed) amendment, the power to decide which races in Sarawak shall be recognised as being indigenous to the state shall be determined by the state through state laws,” he said. 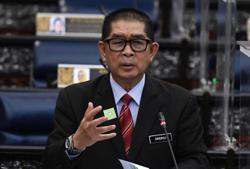