KUALA NERANG (Bernama): The government must find a formula or method to increase the price of scrap rubber from the current price of RM2.50 per kilogramme so that rubber smallholders under the Rubber Industry Smallholders Development Authority (Risda) can enjoy a better income, says Rural Development Minister Datuk Seri Mahdzir Khalid (pic).

"The price of scrap rubber must be at a sustainable rate for the rural community, especially rubber smallholders.

"As Risda mentioned, it wants RM3.50 per kg as the floor price of scrap rubber, we know it is difficult but we must find a formula towards this end.

"If we are to say it will happen tomorrow, maybe it won’t happen, but at least the concern of the government is there.

"The government must think of a way and method to increase its price," he told a media conference, here, on Saturday (Oct 16).

Mahdzir said the current low price of scrap rubber compared to other crops also made rubber smallholders want to change to planting other crops to get a more lucrative income.

To overcome this, Risda introduced various forms of incentives and schemes aimed at helping smallholders, among them being replanting aid, seed and fertiliser transport programme, marketing and constructing related infrastructure.

"Risda is aware that the price is the reason for the crop shift. Except that I am of the opinion we can still persevere despite many mentioning other crops but we should not overly follow the global commodity prices," he said.

Meanwhile, Mohd Salim said Risda wanted the floor price of scrap rubber to be increased to RM3.50 per kg to ensure rubber crops would continue to be cultivated, especially by the young, and the country’s rubber output would continue to go up in future.

"The cost of replanting rubber has gone up but the produce is still being sold at the old price, this is what we are worried about.

"Now, we are the sixth biggest rubber producer in the world, we fear we may fall again when many rubber smallholders switch to other crops,” he said. - Bernama 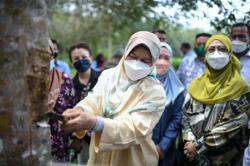