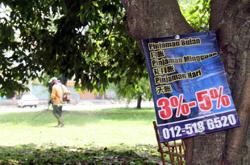 KUALA LUMPUR: Bukit Aman has warned the public to refrain from working with ah long, or face the consequences.

"Although various eradication activities were conducted, these syndicates continue their activities because we believe there is still demand among borrowers.

"Recently, we have found that these syndicates now offer those debtors to work off their debts with the syndicates.

"Two such cases involving two victims were detected in Sabah so far," he said in a statement on Wednesday (Oct 13).

He said investigations revealed the syndicates would offer victims to work with them under two circumstances.

"Those who could not get approval to borrow money from the ah long would be offered jobs as paint splashers, or deliver threat notices and would be paid for their work.

"They would also offer those who could not settle their debts to work it off based on the work they do for the syndicates," he said, reminding the public that those who worked with the syndicate willingly or were coerced into working with them were committing crimes.

He said action could be taken against those working with ah long under Section 5(2) and Section 29B(1) of the Money Lenders Act 1951 for conducting money lending activities without a licence and causing disruptions to borrowers respectively.

"The public is also reminded not to work or help these ah long to commit disturbances or mischief even if they were coerced to do so," he said.