Parents not rushing to travel JOHOR BARU: Parents with young children are taking a wait-and-see approach before deciding whether to travel to other states once the government lifts the ban on interstate travelling, which is likely to be soon.

Insurance agent Azizi Majid, 38, said that it has been a while since he visited his relatives at his kampung in Negri Sembilan due to Covid-19.

“It is good that the government is looking at lifting the interstate travel ban but at the moment, I am not taking any risks to travel with my family outside Johor.

“I have a six-year-old son and the Covid-19 threat is still there even with new daily case numbers dropping,” he added.

Azizi said that he would wait to see if there is any increase in new cases before deciding.

K. Kogie, 37, a mother to a seven-year-old girl, said that she would only travel with her husband and child if there was a family emergency or for work-related purposes.

“If it is only for vacation, we will not be travelling as we want to avoid places with large crowds at the moment.

“Even though my husband and I have already been inoculated, we do not want to put our daughter at risk,” she added.

Housewife Shahizatul Farha Rosli, 37, who has three young children between the ages of four and eight, said that she and her husband are thinking of visiting their family in Terengganu when interstate travel resumes.

“It has been almost a year since we last visited my husband’s side of the family and my kids miss their grandparents very much.

“If we are going to the East Coast, we will be taking precautionary measures to safeguard our children from Covid-19,” she added.

She said among the measures they would take are making sure that her two boys and one daughter always wear double masks, carrying hand sanitiser, and not going to places with large crowds.

“It will be a straight drive from our home in Senai to Terengganu and we will only stop for toilet breaks and rest,” she said.

Presently, only teenagers between 12 and 17 years old are given vaccination shots under the National Covid-19 Immunisation Prog-ramme.

The government has stated that people can cross state borders once 90% of Malaysia’s adult population have been vaccinated.

“If you want to balik kampung to see your elderly parents, do a RTK saliva test. Keep them safe,” Khairy tweeted yesterday.

To a question from a Twitter user, Khairy said there would continue to be random checks on standard operating procedure compliance at various premises.

“This will remain as part of the police’s Ops Patuh,” he said, citing random checks on restaurants and other places.

“This will still be important. But certainly no massive roadblocks.”

The government is preparing to transition Malaysia from a Covid-19 pandemic to an endemic phase, where all sectors are reopened and people learn to live with the virus.

“As we transition towards endemicity, we cannot police things anymore, such as setting up roadblocks to see if you have been fully vaccinated or tested,” he said.

Khairy said the onus is now on the Malaysian public to practise responsible behaviour.

“Much will now depend on personal responsibility and behaviour. I believe we can rise to the challenge in #ReopeningSafely,” he said.

Menwhile, in IPOH, some parents are ready to take their children on interstate travels once the ban is lifted.

Those who spoke to The Star said that their children are also eager to go out as they have been staying at home for months.

Nor Afiza Mohamad Tarmizi’s 10-year-old daughter has been asking her to make hotel reservations.

“Before the pandemic started, we often took our daughter for a holiday every couple of months.

“The last trip we had was in January when we made a trip to Lumut (in Perak), just before the interstate and inter-district bans were implemented,” said the 36-year-old housewife.

“Ever since then, her life has been just online classes and I can see how it has taken a toll on her.

“She often tells me that she is tired from looking at the screen and not being able to go out and play with her friends.

“She also told me that some of her friends had shared pictures of them going to hotels so she keeps asking me to do the same,” she said.

Nor Afiza, who got her second jab on Oct 6, said once her vaccination waiting period ends, her family would go to Penang.

“We will go during weekdays to avoid the weekend crowd,” she said.

For 31-year-old content writer Tiffany Oon, she will wait for at least a month after the ban is lifted before travelling with her two-year-old son.

“I plan to travel to Kuala Lumpur so my grandmother can meet my son, who hasn’t seen her for almost a year.

“We will likely be staying at our relative’s house and avoid crowded places,” she said.

“We will also do a self-test first to ensure we are all not infected,” she added.

Many parents worry about their unvaccinated young ones 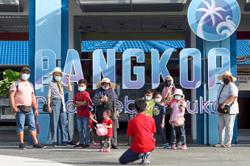