FT Minister: Engagement with stakeholders on the restriction on liquor sales in KL ongoing

The Federal Territories Minister said that he will not rush into a decision before concluding his meeting with all the stakeholders, including opposition representatives.

"We cannot think only of those who are selling liquor, but also those who will buy it.

The Malaysian Family government will respect both Muslims and non-Muslims," he said.

"Let us come up with a win-win solution before deciding," added Shahidan in reply to a supplementary question from Teresa Kok (PH-Seputeh) during Minister's Question Time.

Kok had asked the ministry whether the ministry was willing to enter a dialogue with owners of grocery, convenience stores, sundry shops and Chinese medicine halls who are opposed to DBKL's new guideline to ban hard liquor.

DBKL had postponed the enforcement of the ruling until Oct 31.

In preparation of the guideline, the ministry had engaged with various stakeholders including liquor manufacturing, packaging and sales associations as well as non-governmental organisations.

Shahidan said that the new DBKL guideline objective was to limit the access of liquor among Muslims as well as to those who are below the age of 21.

"Despite the ruling, non-Muslims can still get access to liquor at certain locations in hotels, pubs, bars and dedicated stores selling liquor," said Shahidan.

According to Shahidan, the ministry had approved all new applications to sell liquor between 2019 and 2020.

"In 2019, for the Class 1 LMK license, we received a total of 434 new applications, and all of them were approved.

"If it is at the premises that are allowed, we will not reject it, except if they did not adhere to our rules," said Shahidan. 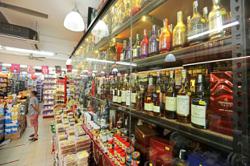