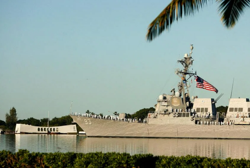 PETALING JAYA: Leonard Glenn Francis, the Malaysian man at the epicentre of the US Navy’s worst corruption scandal, has broken his silence in a tell-all podcast since pleading guilty in 2015 for defrauding the US Navy’s Pacific Seventh Fleet of almost US$35mil (RM145mil).

Penang-born Francis, 57, who has been under house arrest for over three years in San Diego, California, spoke to host and journalist Tom Wright of how he had held the US Navy “in his palm” and could move US Navy ships like “paper ships in the water” as he had top officers in his pocket.