KUALA LUMPUR: Cancer survivor, Amelia Tan, who has been battling the disease since she was 18, is starting on a new chapter in life after getting a postgraduate scholarship to study biological science in Japan.

Tan, 31, started a home-based business in 2009 after recovering from spinal metastasis that left her wheelchair-bound.

“I was diagnosed with fourth stage lymphoma at 18 with the cancer already spreading to my spine.

“I was bedridden throughout my cancer treatment and out of sheer boredom, started playing with my mum’s bead collection.

“This little pastime became an all-consuming passion and later on, when I learnt to sit up and transfer into a wheelchair on my own through intensive physiotherapy, I decided to sell my creations online,” Tan said in an interview.

At a time her self-confidence was low, she said the anonymity of an online business was appealing.

“Selling online meant that I could work at my own pace and most importantly, nobody could see me.

With intricate, whimsical creations such as Misty, At The Bay and Juiced, Tan created a fairyland of artisan jewellery using crystal and bicone beads, pearls, a multitude of charms and the occasional Swarovski embellishment.

The business grew and Tan was kept busy with a steady stream of orders, but after three years, she hit a plateau.

“I had accomplished what I wanted with the business and felt that I was ready to move on. By then, I was a different person from when I was first disabled. I had come to terms with my disability and embraced my identity.

“I no longer see myself as wheelchair-bound, instead, I see the chair as an extension of myself,” she said.

With a new zeal for life, Tan enrolled in Taylor’s University in 2015 and obtained a Bachelor of Biomedical Science (Hons) with a 3.99 CGPA, while still running her jewellery business.

A stroke of luck led her to a scholarship offer advertised by the Japanese government just a few days before the closing date.

After nearly a year of interviews and selection stages – during which she worked as a research assistant in Universiti Malaya and also fulfilled jewellery orders – Tan received the good news that she had been awarded the scholarship.

She was supposed to go to Japan in April last year.

Her departure was delayed until last month due to the Covid-19 pandemic.

“In a way, this delay was a blessing in disguise as I had undergone surgeries and was on bed rest for six months.

“During that time, I enrolled in an online intensive Japanese language course for beginners that came with the scholarship.

“While my master’s programme will be conducted in English, I need to have a basic grasp of the language,” she said.

During a two-week quarantine in Japan which she has just concluded, Tan had a bit of time to reflect on life.

“Everyone’s different, but for me, it wasn’t just about the physical part of it (being disabled), but it included a change in self-identity.

“Had I not felt ready when I went to university, I wouldn’t have had such a good time then, which is why I am thankful that my family never pressured me to ‘just move on with life’.

“As for the future, I hope I will enjoy my research life here as well as being independent in a foreign country,” Tan said, adding that her blogshop would be closed indefinitely while she is overseas. 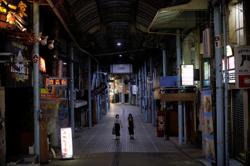