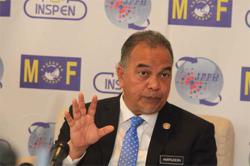 SEVERAL Opposition MPs have questioned the need to spend RM30mil on renovations to the Prime Minister’s official residence during a time when the economy has been affected by the pandemic.

Datuk Amiruddin Hamzah (Pejuang-Kubang Pasu) said it was unnecessary to spend such a huge amount on renovations when the money could be better used to fight the Covid-19 pandemic.

“It is very insensitive for such expenditure to be made during the present situation when the rakyat are struggling to make ends meet,” he told a press conference at the Parliament lobby yesterday.

He expressed surprise that “security” and “image” were the reasons given to justify the renovations carried out on the Prime Minister’s official residence, Seri Perdana.

He said the money could have been used to procure medical supplies and equipment for frontliners battling the pandemic.

Amiruddin was referring to a written reply given to a question raised over the renovation cost of Seri Perdana in Putrajaya.

The question was raised last week by Datuk Mahfuz Omar (PH-Pokok Sena) who wanted to know the status of renovation works at Seri Perdana during Tan Sri Muhyiddin Yassin’s tenure.

About 60% of the renovations have been completed as of August.

The renovations, among others, include structural works, electrical wiring, air-conditioning and replacement of old furniture.

Hannah Yeoh (PH-Segambut) said her questions posed to the prime minister on the cost of renovations for all Cabinet ministers and deputy ministers were left unanswered.

Instead, she was given a reply on the renovation cost for the offices of two Cabinet ministers and two deputy ministers under the Prime Minister’s Department between 2020 and 2021, amounting to more than RM1mil.