KUALA LUMPUR (Bernama): A retired naturalised athlete is alleged to have cheated former senior sports official Datuk Sieh Kok Chi and his disabled daughter of close to RM1.5mil in a property case.

Kok Chi, who served as the Olympic Council of Malaysia (OCM) secretary-general from 1992 to 2015, claimed that his 47-year-old daughter Sieh Shen-Nern’s signature was forged by the former athlete, who had represented Malaysia in the Olympic Games.

The 82-year-old Kok Chi, who has dedicated decades of his life to sports administration, has lodged a police report accusing the former athlete of forging the signature in the Power of Attorney to transfer half a share of a shop lot in Sri Petaling owned by Shen-Nern and the former athlete.

“My daughter was born with physical impairment and intellectually disabled, can only sign her signature in my presence guiding her. The signature signed on the Power of Attorney in March 2014, which I was not present or I have not seen, is different from the one signed on the Sales and Purchase Agreement in March 2012 under my guidance.

“I have taken her to Melbourne on at least two occasions to have her medically examined by specialists, all of whom confirmed her to be intellectually disabled. My daughter was unable to pass both her Standard Six government examination at 11 and her Lower Certificate Exam (LCE) when she was 14 years.

“As she was very poor in her studies, my daughter could not read or write in Bahasa Malaysia or English,” Kok Chi, who is now hospitalised for respiratory issues, said when contacted.

Kok Chi, who retired as an engineer in the Department of Irrigation and Drainage in 1991, is well-known in the local sports administration, as he had been involved in OCM since the 1970s and was the national contingent’s chef de mission for the 1999 Brunei SEA Games.

According to Kok Chi, the former naturalised athlete had approached him in 2012 for help in buying the property, where he agreed to jointly purchase the shop lot under the names of Shen-Nern and the former athlete. He said he paid RM1.46 million and assisted the former athlete to get a bank loan for RM1.5 million. However, Kok Chi said that in late 2020, he found that the property had been transferred to the former athlete’s name in October 2019 without his and Shen-Nern’s knowledge.

Kok Chi said he allowed the former athlete to operate business in the property, where no rent has been paid to him.

The former naturalised athlete had represented Malaysia in the late 90’s and 2000s. Bernama has contacted Dang Wangi district police chief ACP Noor Dellhan Yahaya, but he has yet to respond at the time this story was written. – Bernama 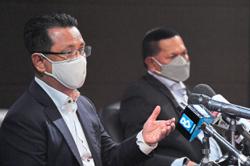