They all pleaded guilty to the charges read to them individually before Special Corruptions Court judge, Abu Bakar Manat on Friday (Sept 24) and paid the fines imposed.

For the first officer, Mohd Hanip Juarip, 33, he was accused of putting in a total of six receipts amounting RM1,473 in hotel stays between February and August, 2017.

He pleaded guilty to the six charges, and was fined RM1,500 for each charge or risk sitting for a three months’ jail term if he failed to pay the penalty.

The second, Razilah Sahad, 39, was issued with eight charges of similar claims amounting over a few thousand ringgit for alleged hotel stays between April and December, 2017.

She was handed a RM1,500 fine per charge, which means she needs to pay RM12,000 for all her offences or face a jail term of three months for every charge not paid.

The third accused, Panduan Paglin, 40, was guilty of falsifying claims amounting to RM3,443 in six charges, for hotel stays between March and November 2017.

He was handed a total of RM9,000 in fines and could be jailed for three months per charge, if he failed to pay. 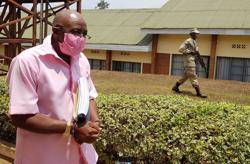