The Transport Minister said according to present cabotage policies, foreign vessels are allowed to enter Malaysian waters and only need to apply for an electronic domestic shipping license (eDSL) before entering.

"The EDSL only takes three days to approve, unlike 45 days previously," he said during his winding-up speech as Transport Minister in Parliament on Wednesday (Sept 22).

He was responding to Anthony Loke (PH-Seremban), who interjected and said that cabotage exemption was still needed because there are no ships that are capable of repairing undersea cables in Malaysia.

The Ayer Hitam MP thanked Loke for his remarks, but noted that Indonesia also had a very strict cabotage policy, saying foreign entities in Indonesia are not allowed to be main shareholders in companies and can only hold 49% interest.

"Indonesia has a cabotage policy and it is even more stringent than ours," he added.

Dr Wee said under the present cabotage policies, 10 ships were given EDSLs within three days.

"Some are saying Malaysia bans foreign vessels – that is untrue. We allowed Singaporean vessels such as the Asean Explorer and the Asean Restorer to enter," he said.

Nevertheless, Dr Wee said the national cabotage policy would be thoroughly discussed by the Cabinet in early October.

"I'm confident that any decision made will be a balance between digital sovereignty and security."

Dr Wee also said the government would take into account the views of the National Security Council (NSC), Home Ministry, the Communications and Multimedia Ministry, the Finance Ministry, the Economic Planning Unit and other relevant stakeholders.

"This will be a decision that will not obstruct foreign investment and at the same time, will safeguard national sovereignty – just as implemented in Singapore and other neighbouring countries," he said.

The re-imposition of the cabotage policy for submarine cable repair works has been a contentious issue, with critics arguing that such a policy could deter foreign investment and cause giant tech companies to exclude Malaysia from cable projects aimed at boosting regional Internet connectivity.

However, calls to re-impose the cabotage policy were defended by the Malaysian Shipowners' Association, which deemed the move necessary to safeguard national sovereignty and the interests of the national shipping industry.

Introduced in January 1980, the cabotage policy for cable repair works was revoked by the former Pakatan Harapan government in April 2019, which exempted vessels involved in submarine cable repair and maintenance work from having to apply for a domestic shipping license. 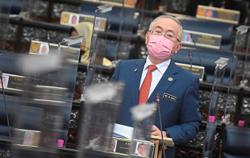