Labour of love: Loh making mooncakes with his wife and daughter at their shop in George Town.

GEORGE TOWN: With fewer orders this year due to the Covid-19 pandemic, a third-generation traditional mooncake and pastry maker has opted to make each piece of mooncake by hand.

Loh Mun Loong, 54, says crafting each piece of mooncake by hand gives it a personal touch and they are tastier.

“In the past year, I used to mass produce mooncakes by using machines.

“However, to retain tradition, I decided to make some by hand,” he said.

Mooncakes are eaten during the Mid-Autumn Festival which is celebrated today.

Also known as the Mooncake Festival, it is traditionally celebrated on the 15th day of the eighth month of the Chinese lunar calendar.The term “mooncake” was used for the first time during the Tang Dynasty (618-907) to describe the sweet delicacy.

A popular legend also tells of how the Han Chinese rebels used mooncakes to pass on secret messages in the final uprising against Mongol rulers, leading to the creation of the Ming Dynasty in 1368.Loh revealed that his grandfather, who migrated from China, had started the business in the 1900s.

“With machines, we can produce 20 pieces in a minute, while it takes much longer if we do it by hand,” said Loh.

He described traditional mooncakes to be more fragrant compared to machine-made ones nowadays.

“The handmade mooncakes need to be consumed quickly as we do not add any preservatives.

“Due to the pandemic, we have taken our business online but it is rather difficult for us to have the mooncakes packed and delivered to our customers as we are worried they will get damaged or spoilt before reaching the destination,” he said when met at his shop here recently.

“The popular traditional flavours are red bean, yellow bean, lotus, coconut and mixed nuts, among others.

“To keep up with the times, we have created some with seasonal flavours such as durian, chocolate, black white sesame and mango.

“If we have extra time, we will make customised mooncakes for our regular customers.

“Some of them requested mooncakes with eight yolks and some asked us to make coffee-flavoured ones.

“My grandfather had always reminded me to make mooncakes with love and not to emphasise on the profit.

“Although the cost of ingredients has increased over the years, the price of our mooncakes remains the same as we want everyone to enjoy the delicacy during the festival,” he said. 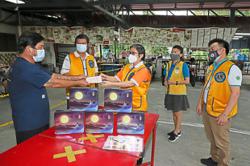